A local development firm that has recently made headlines for building supportive housing without public subsidies now has its eyes on three city-owned properties in South Los Angeles. 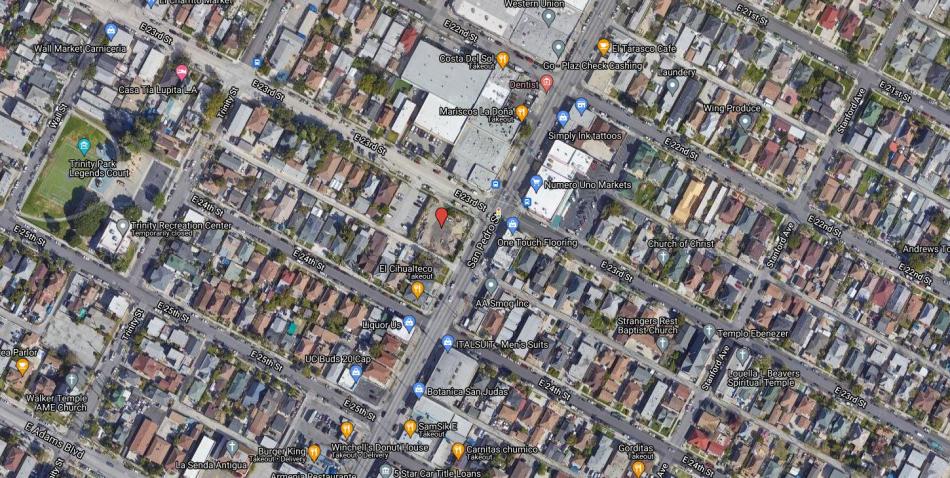 In a motion introduced on June 30, 9th District City Councilmember Curren Price has proposed leasing three properties at 2301 S. San Pedro Street, 5887 S. Crocker Street, and 5888 S. Crocker Street to developer RMG Housing, LLC, which would in turn redevelop them with permanent supportive housing.  The first property is a vacant corner lot at San Pedro and 23rd Street in Historic South-Central, while the latter two sites are mid-block properties between located just south of Slauson Avenue in Florence.

The proposed arrangement, which would occur without a traditional solicitation process, is motivated by an agreement between the City and County of Los Angeles to develop 6,000 new beds for homeless persons living near freeway beds over a 10-month period.  The deal, which was approved by a Federal judge, also expects the creation of 700 additional beds over an overlapping 18-month period.

"Based on the timeline to bring 6,700 beds to house the homeless expeditiously in order to meet the terms of the City/County agreement, the public interest and necessity requires that the City enter into agreements to develop [permanent supportive housing] with RMG Housing, LLC without advertisement for bids," writes Price.  "RMG will partner with an experienced supportive services provider to provide full time services to the formerly homeless tenants."

RMG Housing is already poised to build 160 homes on two other city-owned properties in buildings composed of prefabricated modular units, such as a project that recently broke ground at the intersection of 52nd and Figueroa Streets.

Price's motion, which has been referred to the Council's Homelessness and Poverty Committee for consideration, would instruct the City Administrative Officer and other departments to prepare terms and documents necessary to facilitate the agreement, including a ground lease.

RMG Housing, which is based in Hermosa Beach, has financed its upcoming slate of supportive housing developments through a $100-million social impact fund which, reports the Los Angeles Times.  The decision to not tap into tax credits or other government sources allows RMG to build its projects faster and at a lower cost than similar developments, according to the Times.