With MacArthur Park's $1.5-million facelift now in the rear-view mirror, the City of Los Angeles is now preparing to undertake a new project which would improve water quality in the park's centerpiece lake - as well as the Ballona Creek watershed.

A new stormwater capture project, proposed by the LA Sanitation & Environment in partnership with the Los Angeles Department of Recreation and Parks, aims to use MacArthur Park Lake to store stormwater flows - as well as dry weather flows - from the city's storm drain system. This would have the benefit of decreasing the need for potable water to maintain the lake's water level, while also removing pollutants that would otherwise enter Ballona Creek and Santa Monica Bay.

According to an initial study released by the City of Los Angeles, the project's visible above-ground features would include a new lined treatments wetlands at the southwest corner of MacArthur Park, near the intersection of 7th and Park View Streets. The wetlands, which would be accompanied by educational signage regarding stormwater management, would feed into underground infrastructure which would then discharge water into the sewer system, later feeding into Ballona Creek and Santa Monica Bay. 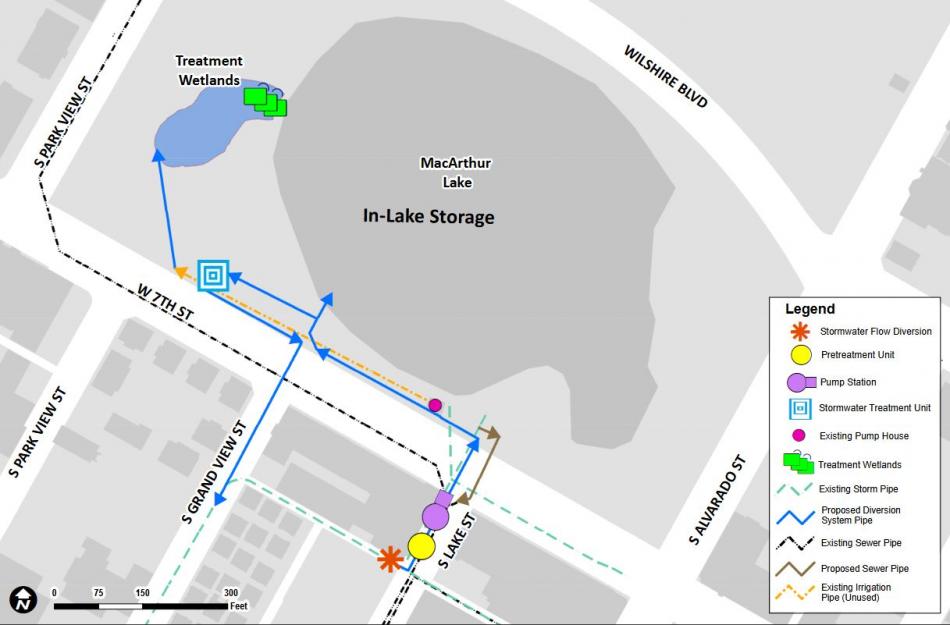 The project, which is expected to be built over a period of approximately 22 months, would require the relocation of up to two mature trees and three newly-planted trees elsewhere within the park. A precise timeline is not included in the initial study.

The addition of new wetlands to the park is occurring independently of an earlier effort from City Councilmember Gil Cedillo to spend up to $20-million to add new amenities to the park, which calls for potentially restoring its boathouse and concession facilities. The more recent makeover, which required a four-month closure of the park, included repairs, new landscaping, and recreational amenities, and also required the relocation of more than 180 unhoused persons who had been living in the park.

The wetlands project is being funded with a $20-million allocation of Measure W funds approved by the Los Angeles County Board of Supervisors in 2020, according to a blog post on the Bureau of Sanitation website.