In April 2022, construction began for a long-awaited a $90-million wildlife crossing above the US-101 Freeway in Agoura Hills - the end result of a 20-year campaign to create an easier path of travel for the mountain lions and other animals whose habitats have been hemmed in by the highways that crisscross L.A. County. Hopefully plans for a similar project in the mountains just north of Sylmar will proceed on a speedier timeline.

The Newhall Pass wildlife crossing, as detailed in a November 2 letter issued by the Mountains Recreation and Conservation Authority,  would restore connectivity between the between the Santa Susana Mountains and the San Gabriel Mountains. While the stated intent is to study a crossing of the I-5 corridor, the  study will also consider the potential for a new crossing above the nearby SR 14 Freeway, which branches off through the Santa Susanas toward the Antelope Valley. 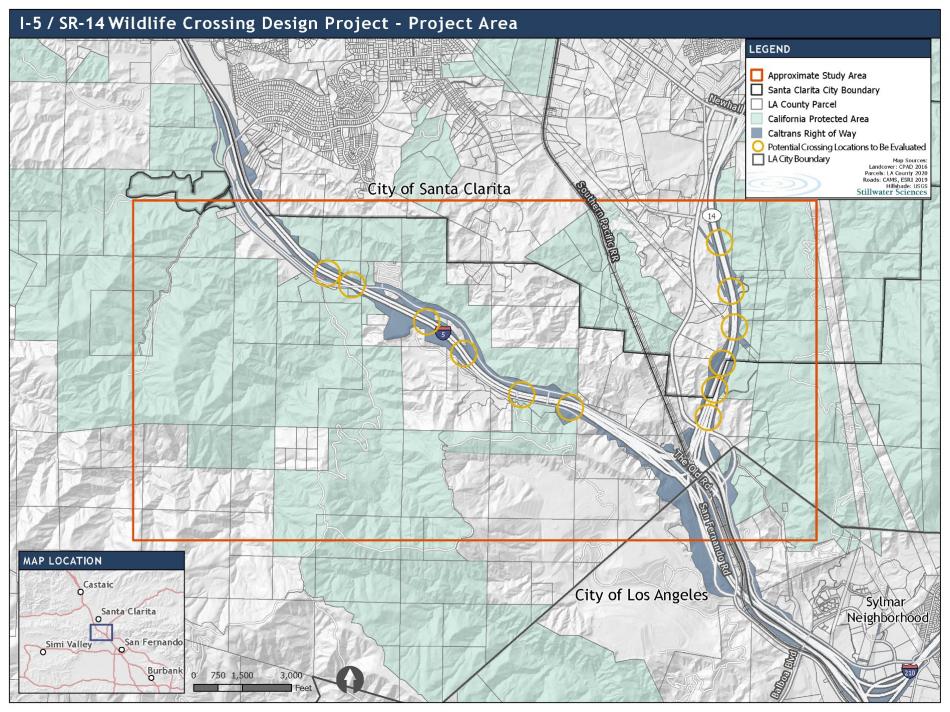 "More than two decades of study by the National Park Service in the Los Angeles area has shown roads and development are not only proving deadly for animals trying to cross but have also created islands of habitat that can genetically isolate all wildlife—from bobcats to birds to lizards," reads a grant application submitted for the project. "One species at immediate risk, the mountain lion, faces pressures from inbreeding depression and vehicle collision mortalities, and could vanish from the area within our lifetime."

Other species, including deer, badgers, and roadrunners that live in the area may be able to make use of the crossing, according to the application. Likewise, the study will consider potential impacts to species such as the California kangaroo rat, lizards, squirrels, weasels, and quail.

The project comes about at a time when L.A.'s biodiversity faces severe impacts in the face of climate changes, and local officials have scrambled to shore up ecosystems. L.A. City Councilmember Nithya Raman has proposed the development of a regional Wildlife Habitat Connectivity Plan, encompassing both Los Angeles and Ventura Counties. Additionally, habitat restoration has remained a key consideration in various plans to bring new open space to the L.A. River corridor.