Despite its longstanding reputation for urban sprawl, recent years have seen developers look inward in Los Angeles, which has experienced a residential boom in its urban core. That boom, according to a new study released by Yardi Matrix, ranks as the second most prolific in the entire country over the past decade. 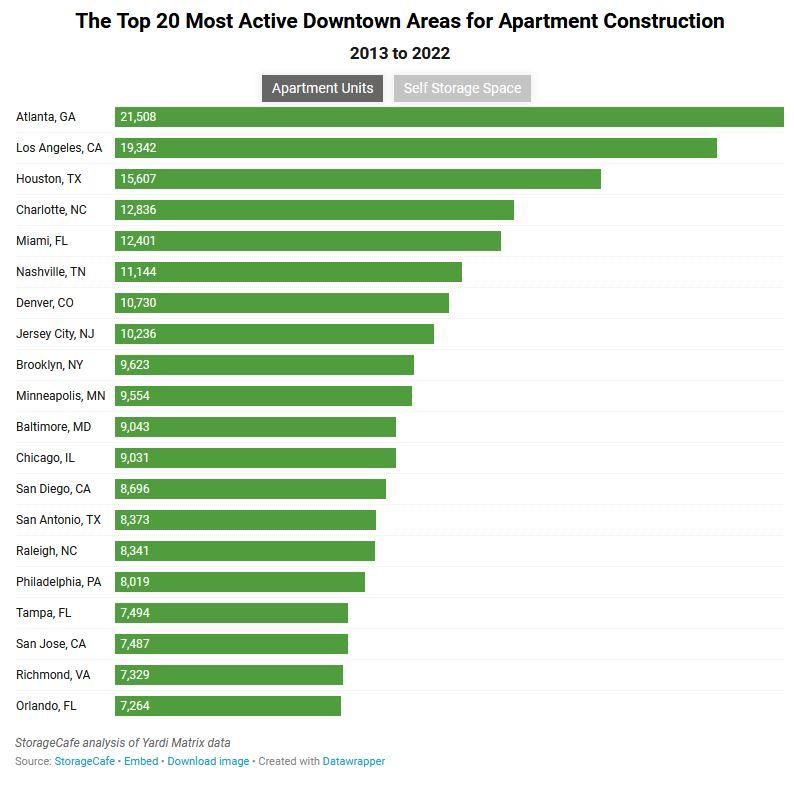 Between 2013 and 2022, StorageCafe data shows that Los Angeles was the second most active city for Downtown apartment construction between 2013 and 2022, adding 19,342 new units. Over that same time period, only Atlanta saw more residential development, adding a total of 21,508 apartments.

In Los Angeles, the apartments built within the Downtown area amounted to 46 percent of total new inventory added citywide over the past decade. According to the data, an additional 900 apartments have opened in 2022, and 4,700 are expected to open in the next few years.

The study also tracked the production of new household storage units in cities across the country. In that respect, the Downtown Los Angeles was not among the more prolific urban cores, adding just over 200,000 new units - less than one third of the totals for Atlanta and Houston.

Housing construction in Downtown Los Angeles between 2013 and 2022StorageCafe

While Downtown came in second in the nation for apartment construction over the past decade, it ranks even higher over the past five years. Yardi data showed that between 2017 and 2021, the neighborhood saw a total of 10,136 new rental units completed, by far the highest total of any Downtown in the country.