In 2020, Los Angeles City Councilmember Marqueece Harris-Dawson introduced a motion seeking to strengthen zoning rules which restrict the development of student housing in Exposition Park and University Park, while also identifying the cause for the continued loss of affordable housing in the neighborhoods surrounding USC. A report given last week by Los Angeles Planning officials showcases how city staff are looking to respond to that direction.

The effort, which would be implemented as an update to the South Los Angeles Community Plan Implementation Overlay (CPIO), aims to tackle five core issue, including: 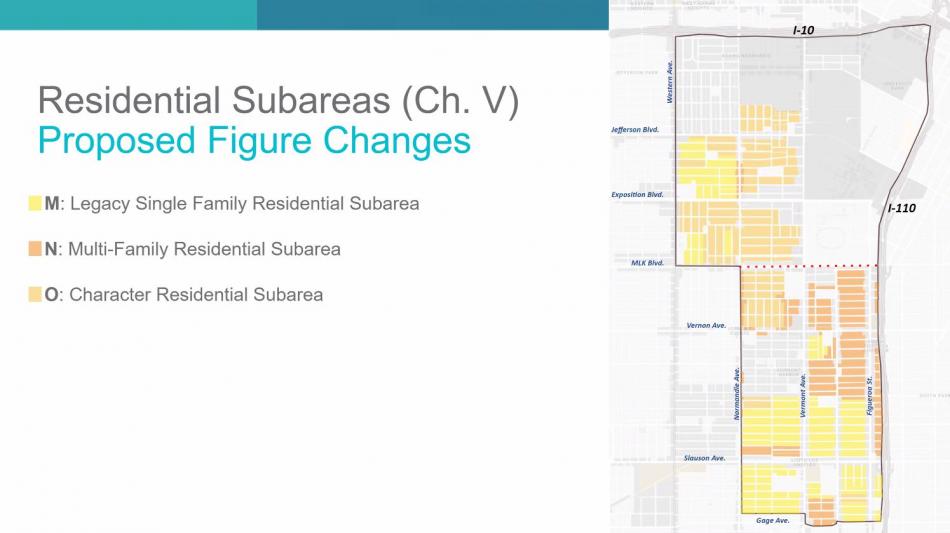 The subareas are expected to see new design standards intended to force new construction to better complement existing patterns of development. These include requirements for stepbacks above the first floor of buildings, and setbacks to match those of adjoining properties. The update proposes that more off-street parking would be required for residential projects that include units with three or more bedrooms – a requirement which would limit the construction of co-living apartments and student housing.

Additionally, the CPIO update proposes a new restriction which would block the demolition of existing structures when building permits for a new building on the same site have not been approved.

The CPIO update also offers an opportunity to implement changes required by new state legislation, including SB 8 and SB 330, which requires that new developments abide by requirements to not reduce the overall amount of housing and replace any demolished units subject to rental protections. The CPIO requirements would go a step further than state law, in some cases, including a requirement that any replacement units not just have an equivalent number of bedrooms, but also bathrooms and floor area. Likewise, a replacement unit for an apartment where no income documentation for a prior tenant is available will default to the extremely low-income level. 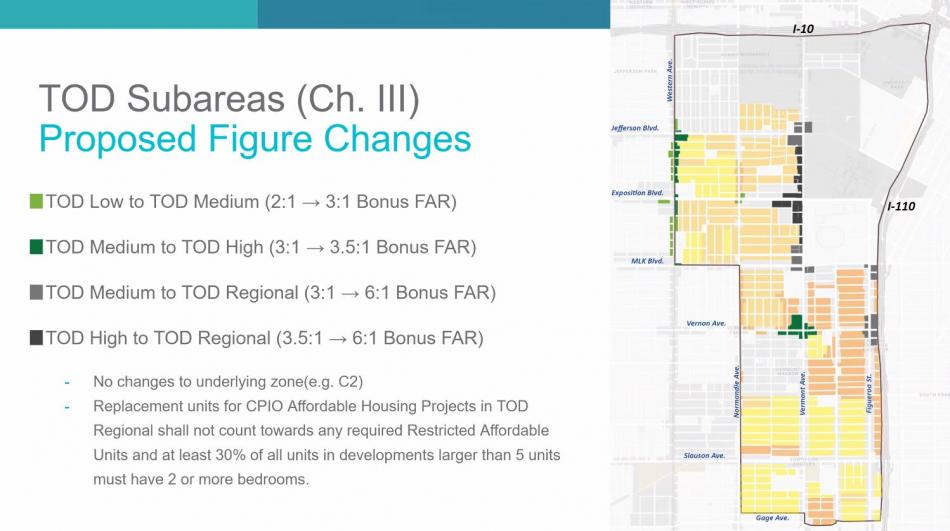 To offset the loss in development potential resulting from stricter development standards, the CPIO update would increase the maximum floor area allowed for properties in its TOD subareas, which include Vermont and Western Avenues between Jefferson Boulevard and Martin Luther King Jr. Boulevard, as well as nodes at the intersections of Vermont and Vernon Avenue, Figueroa Street and Vernon Avenue, and Figueroa Street and Martin Luther King Jr. Boulevard. But while the development potential of these sites would be augmented, the underlying zoning is to remain unchanged.

The CPIO update is expected to go before the Los Angeles City Planning Commission for consideration in November, and then to the City Council for adoption in December. That would then set the stage for an update to the overall South Los Angeles Community Plan, which would incorporate the city's new zoning code string and add a tailored base-bonus system akin got the Transit Oriented Communities guidelines.