Since the passage of Measure M in 2016, the City of West Hollywood has aggressively pushed to accelerate the construction of a northern extension of the Crenshaw/LAX Line - preferably on an alignment running below Santa Monica Boulevard. Now, after pursuing a public relations campaign and the creation of an enhanced infrastructure financing district, the city is looking to a potential joint development as a means to bring the rail line home.

At its meeting later today, the West Hollywood City Council is scheduled to consider a staff report from the Economic Development Department which recommends studying the temporary or permanent relocation of the West Hollywood Sheriff's Station as part of a potential redevelopment of the Metro Division 7 Bus Yard at San Vicente and Santa Monica Boulevards. Any analysis would be required to identify potential sites for the relocated Sheriff's Station, as well as potential financing structures, development schemes, and the minimum size and scope of a potential project on the site.

The combined property which houses the bus yard and the Sheriff's station spans approximately 10.6 acres, and could house a station on the Crenshaw/LAX Line - provided the Metro Board selects an alignment which runs through the intersection of San Vicente and Santa Monica. Metro is studying alignments underneath La Brea and Fairfax Avenues, in addition to a "Fairfax-San Vicente Hybrid Alignment," which the City of West Hollywood prefers, as it would permit the construction of up to four stations along Santa Monica Boulevards. 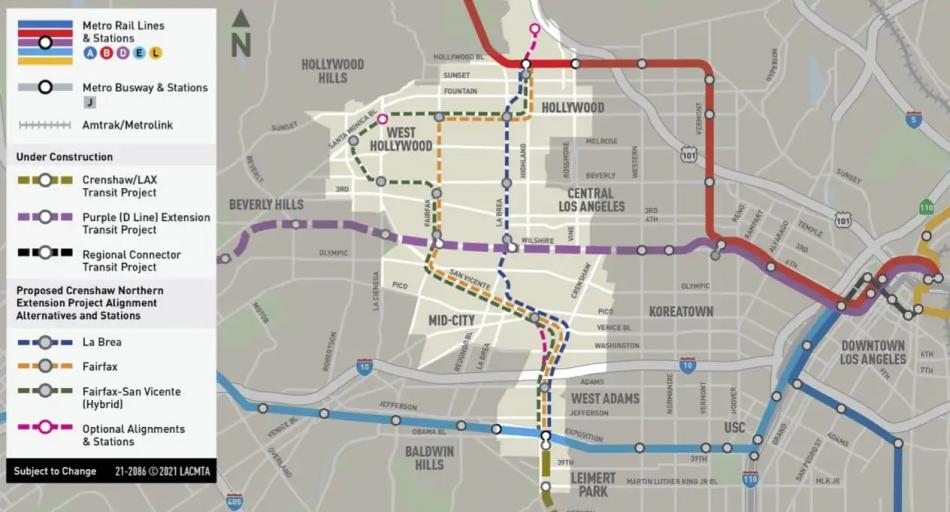 While the circuitous path of the hybrid alignment has drawn criticism from transit advocates, the possible redevelopment of the bus yard and Sheriff's station could be another point in its favor. According to the staff report, money generated by a ground lease for the property and other future tax revenues could help foot the bill for the Crenshaw Line extension, which has $2.3 billion in available funding versus a potential price tag in excess of $6 billion.

The operations of the existing bus yard are also a consideration in discussions between Metro and West Hollywood. As the facility serves much of Central Los Angeles, and the possibility of finding a replacement site nearby is all but impossible, Division 7 would need to be rebuilt below a new development on the property. To maintain operations during the course of the development, construction could potentially occur in phases, starting with the land which currently houses the Sheriff's station.

A joint development concert with the Crenshaw Line extension is not the first time redevelopment has been considered for the Division 7 yard. Nearly one decade ago, Cohen Brothers Realty, which owns the neighboring Pacific Design Center, pitched Metro and the City of West Hollywood on a project which would have created high-rise towers featuring housing, offices, hotel rooms, retail, and a replacement Sheriffs' station. However, those conversations did not ultimately result in a project.