Nearly a year after breaking ground in Westchester, wood framing is starting to rise for a mixed-use apartment complex at the intersection of Sepulveda Boulevard and Manchester Avenue. 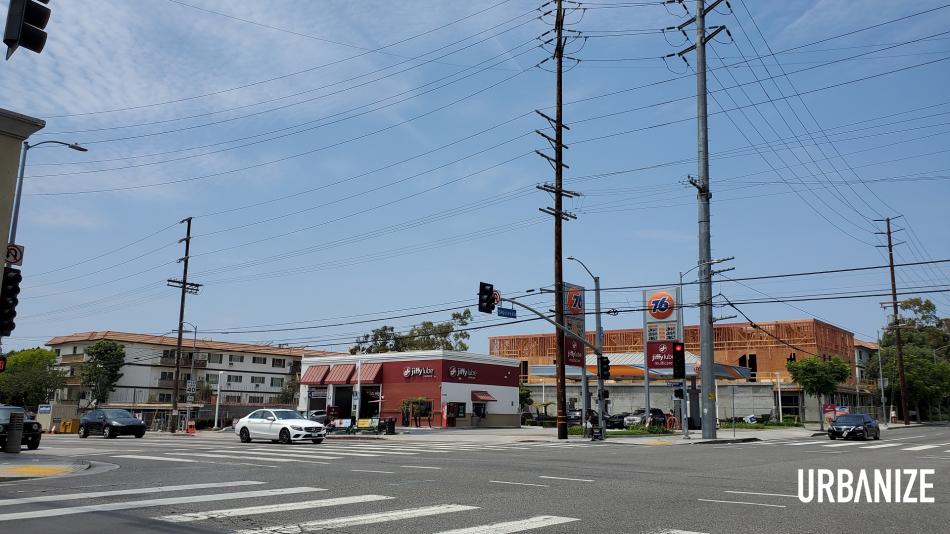 The project, located on an L-shaped site that was once home to a Grinder restaurant, will consist of a six-story building containing 87 apartments above an 82-car garage and approximately 900 square feet of ground-floor retail space.

Developer Caladan Investments entitled the project using Transit Oriented Communities incentives to permit a larger building that otherwise allowed by zoning.  In exchange, eight apartments will be set aside as deed-restricted extremely low-income housing for a period of 55 years.

Lahmon Architects is designing the podium-type building, which will include rooftop decks overlooking Sepulveda and Manchester Avenues.

Completion of the Sepulveda-Manchester development was expected in mid-2022 at the time of its groundbreaking.

The project is the latest in a recent series of new multifamily developments in the Westchester community, including an under-construction project from Sandstone Properties and a recently-completed apartment building by the Hanover Company.  San Diego-based Fairfield Residential has also entered the mix, with plans for a 362-unit complex next-door to Dinah’s restaurant.