Just over one year after we last stopped by, vertical construction is nearly complete for a new apartment complex from Kansas-based developer the Prime Company in Exposition Park.

Located two blocks west of the USC campus at 1320 W. Jefferson Boulevard, the project consists of a six-story building that will feature 130  studio, one-, two-, and three-bedroom apartments above two levels of basement parking at completion. 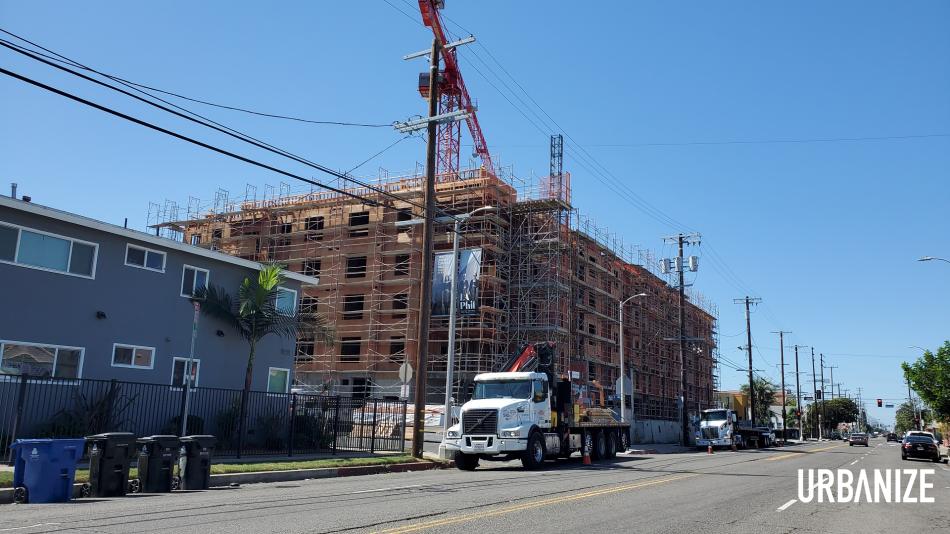 Project entitlements included Transit Oriented Communities incentives, permitting greater density than would otherwise be allowed under zoning rules. In exchange, Prime Place will be required to set aside 13 apartments as deed-restricted affordable housing.

Prime Place affiliate Prime Design is the architect behind the contemporary podium-type building, which will be clad in metal, fiber cement panels, and brick. Planned amenities include courtyards, a recreation room, and a rooftop deck.

The apartment complex, which will have capacity for 270 residents, replaced three small residential and commercial buildings.

A leasing website for the property, which names the project the Jefferson Flats, advertises rooms for double and single occupancy, with monthly rents ranging from as low as $800 to nearly $2,500.

The Prime Company, which specializes in apartment buildings catering to college students, is planning a similar 108-unit residential complex at the intersection of Normandie Avenue and Exposition Boulevard.