Across the street from Lafayette Park, the Town House - a historic hotel turned affordable housing complex - is in store for changes, per an application recently submitted to the Los Angeles Department of City Planning.

The mid-rise landmark, located at the northwest corner of Wilshire Boulevard and Commonwealth Avenue, was built by oil magnate Edward Doheny in 1929 as an apartment-hotel, according to the L.A. Conservancy. Within, the property was converted to a luxury hotel, eventually under the ownership of Conrad Hilton and later the Sheraton hotel chain. By 1993, the hotel had closed, clearing the way for a conversion of the property into 142 units of income-restricted housing. 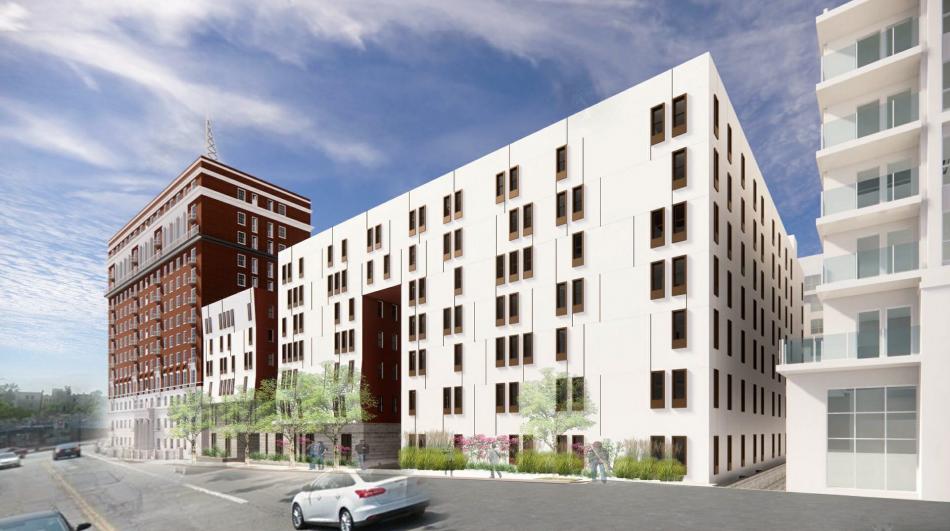 The Town House, alternatively called the Sheraton Town House, has remained largely unchanged in the subsequent three decades, but is primed for an expansion as the more than 90-year-old building faces the prospects of a seismic retrofit. 639 Commonwealth L.P., the Koreatown-based entity which owns the property, is now laying the groundwork for the construction of a new residential building on the site which would fully replace the existing 142 units located within the Town House. This would provide space to relocate existing tenants on-site, permitting the state-mandated retrofit to move forward.

The replacement housing, submitted to the Planning Department for review this month, would consist of a seven-story building designed by Lahmon Architects. Plans describe a mix of one-, two-, three-, and four-bedroom dwellings - averaging between 563 and 1,303 square feet in size - as well as underground parking for 63 vehicles.

"The design objective for the Project was to invoke a design with a unique presence by responding to its context while creating an opportunity for continued equitable improvements to the neighborhood," reads a narrative included with the project findings. "The façade was composed as a uniform grid of identical windows with a simple treatment to reference those of the Sheraton Town House, but with a calculated omission of windows allowing for a blend of old and new. The south end of the Project continues the prominent horizontal banded base of the Sheraton Town House with its own base of horizontally-oriented board formed concrete, pierced with large storefront openings and a grand five-story main entry that activate the sidewalk experience. The north side of the Project more directly addresses the newer mixed-use building to the north by eliminating the base and grounding the front façade. The design is a highly visible structure that serves as a bridge between the historic stature of the Sheraton Town House building and the newer, contemporary designs of the budding, youthful neighborhood"

While the new construction is being entitled through the Transit Oriented Communities incentives, which will require that 15 units be set aside for rent by extremely low-income households, the findings indicate that all existing affordability covenants attached to the Town House will be transferred to the new building, making it fully affordable housing for a period of at least 55 years.

Location of the Town House at Wilshire and CommonwealthGoogle Maps

The proposed ground-up building would not be the first portion of the Town House property to undergo redevelopment. At the northwest corner of the site fronting 6th Street and Virgil Avenue, former hotel amenity spaces were redeveloped five years ago into a 399-unit apartment complex with a Target on its ground floor.

The project joins a handful of new developments in the works around the perimeter of Lafayette Park, including Kurve, a $300-million apartment tower recently completed on the opposite side of Wilshire, and a 64-unit supportive housing complex now rising next to The Bryson, another posh residential building which now serves lower-income renters.