Three years after the project was submitted to the Planning Department for review, the release of a new environmental report is the first sign of progress for a new mixed-use development at 3431-3455 W. 8th Street in Korea town.

View from 8th and HobartCorbel Architects

Dubbed "The Parks in LA," the proposed project calls for razing five commercial buildings along the north side of 8th Street between Harvard and Hobart Boulevards, clearing the way for the construction of an eight-story building featuring 251 studio, one-, and two-bedroom apartments, approximately 22,500 square feet of offices, and 18,000 square feet of ground-level retail. Plans also call for parking for 284 vehicles located in two subterranean levels.

Entitlements requested by project applicant Charles Park & Associates, LLC include Transit Oriented Communities affordable housing incentives, allowing a larger structure than otherwise permitted by zoning rules. In exchange for setting aside 29 apartments would be set aside for rent as very low- and extremely low-income affordable housing.

Corbel Architects is designing The Parks, which is depicted in plans as a contemporary podium-type building with a central promenade at street level which would be lined with shops and restaurants. Above, plans call for an apartment block wrapping a central courtyard, as well as amenities including a fitness center and a game room.

Construction of The Parks is expected to occur over an 18-month period, according to the environmental study. While a precise groundbreaking date is not specified in the document, a landing page on the Corbel Architects website points to a start date in 2023. 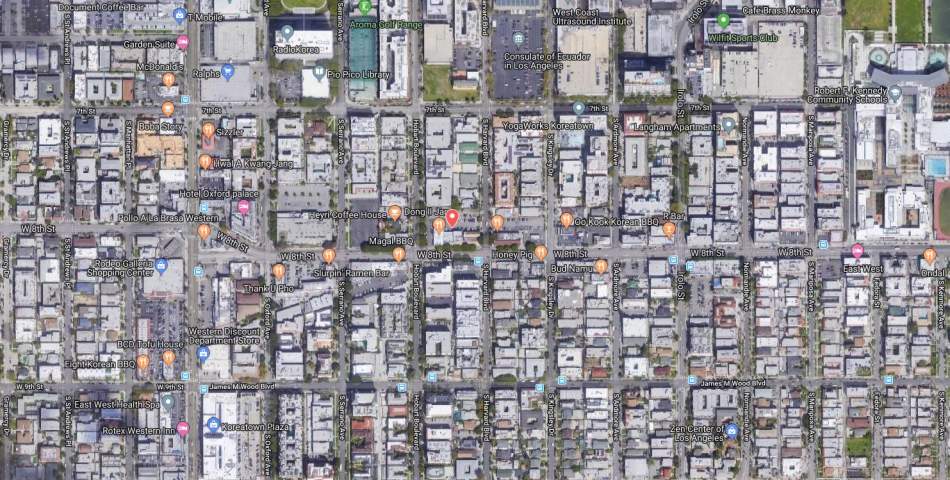 The proposed project is the latest in a long series of new mixed-use projects to reshape the 8th Street corridor through Koreatown, including the Harper apartments at the opposite corner of 8th and Harvard and the Rise apartments one block to the west.