In Downtown Long Beach, wood framing is rising next to the 1st Street Station, where Orange County-based developer Raintree Partners is building out a mixed-use apartment complex named Aster. 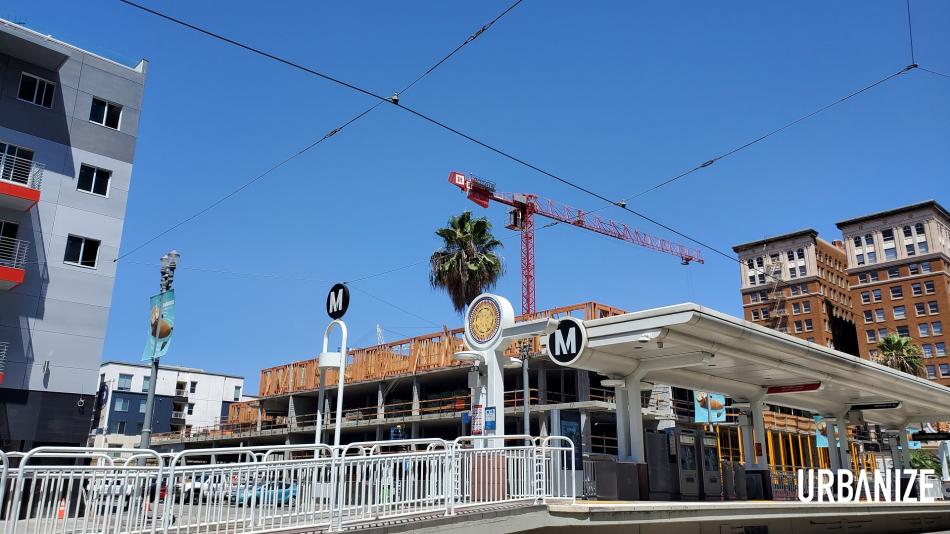 Located at 125 Long Beach Boulevard, the project will eventually consist of an eight-story building featuring 218 studio, one-, and two-bedroom apartments - ranging from 470 to 1,435 square feet in size - in addition to 8,200 square feet of ground-floor retail space. A two-level, 312-subterranean parking garage will sit below the podium-type building.

Designed by Carrier Johnson + Culture, the Aster is intended to have a contemporary look and an exterior of cement plaster and metal panels. Brick veneer will be integrated into the facade of its lower three floors along its northern property line facing Broadway, matching the exterior of an adjoining historic building to the west. Planned amenities include two outdoor decks at the podium level, a roof terrace, a fitness center, and a club room.

Completion of Aster is expected in the fourth quarter of 2024, according to a landing page on the Raintree Partners website.

Aster is rising just east of Broadstone Promenade, a similar 189-unit apartment complex now under construction at 127 E. Broadway. That project was entitled to Raintree, but sold to developer Alliance Residential.

The Aster site also sits across Broadway and Long Beach Boulevard from the Onni East Village, a $215-million housing and retail complex now being built by Vancouver-based Onni Group.