One year after our last update, wood framing is starting to rise above the concrete podium of Broadstone Promenade, a mixed-use development from Alliance Residential in in Downtown Long Beach.

The project, which broke ground in mid-2021 at 127 E. Broadway, will eventually consist of an eight-story building featuring 189 studio, one-, two-, and three-bedroom apartments above 10,000 square feet of ground-floor retail space. Parking for 257 vehicles will be located in three subterranean levels. 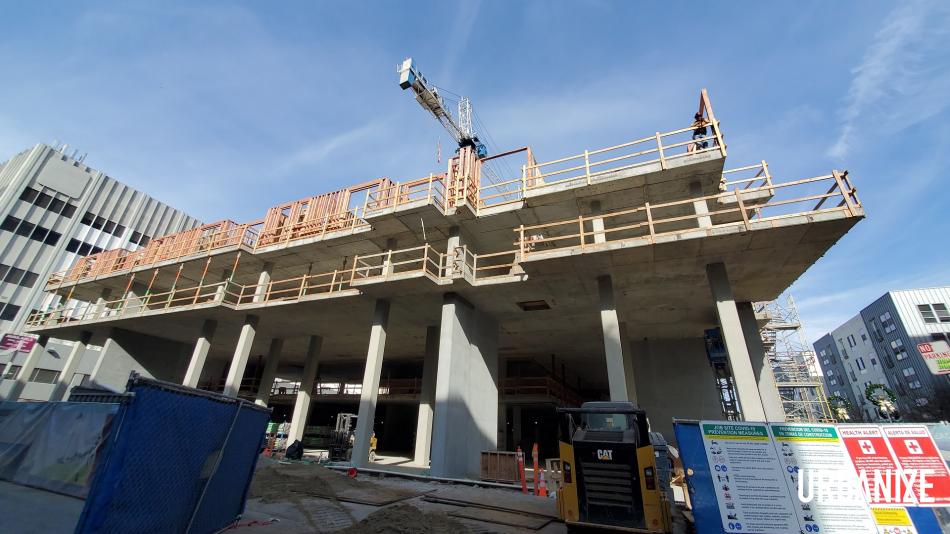 Designed by Studio T-Square 2, Broadstone Promenade is depicted in a rendering with contemporary exterior. Besides housing, the apartment complex is also intended to incorporate amenity decks at its roof level and above its third floor.

Per a design narrative by Studio T-Square 2, the look and feel of the apartment complex is intended to evoke the Long Beach waterfront, with an illuminated tower in the vein of a lighthouse and an undulating canopy above its ground level inspired by waves on a beach.

At the time of its groundbreaking, Broadstone Promenade was expected to open sometime in 2023.

The project site sits a block west of Aster, a similar mixed-use project now being built on Long Beach Boulevard, and a high-rise complex from Onni Group that will create more than 400 apartments between 3rd Street and Broadway.