At its meeting last week, the Los Angeles City Planning Commission upheld the approval of a proposed multifamily residential development at 975 S. Manhattan Place in Koreatown, rejecting an appeal which sought to force the project to undergo a full environmental impact report.

Jamison Services, Inc., the developer of the proposed project just northwest of the intersection of Olympic Boulevard and Western Avenue, calls for the construction of a new seven-story edifice on a currently vacant site, creating 120 studio, one-, and two-bedroom apartments above 127 parking stalls located at grade and in two subterranean levels. 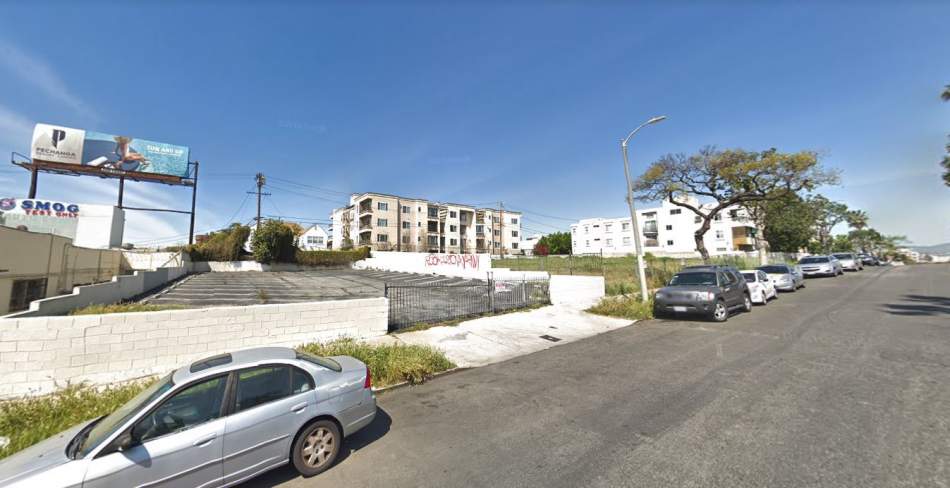 Project entitlements include Transit Oriented Communities incentives, permitting reduced side yard and open space requirements, as well as an increase in allowable floor area. In exchange, Jamison is required to set aside 12 apartments for rent as extremely low-income housing over a period of 55 years.

DFH Architects is designing 975 Manhattan, which is depicted in a rendering as a contemporary podium-type building clad in white stucco and blue metal panels. Plans also call for on-site open spaces including a pool, a courtyard, a club room, and a rooftop deck.

According to an environmental study included with the staff report, construction of 975 Manhattan is expected to occur over a roughly 34-month period commencing in early 2023 and concluding in late 2025.

The project appellant, the Coalition for Equitable Westlake/MacArthur Park, is a frequent opponent of new housing developments in Central Los Angeles, often citing a need for a study of "cumulative impacts" of multiple new projects located in close proximity. In the case of 975 Manhattan, the Coalition argued that the project would have unanticipated impacts on air quality and noise during the course of construction, and urged a more thorough review. A staff response rejected those arguments, citing a lack of evidence.

The rejection of the appeal comes three years after the Planning Commission blessed the construction of a similar project on the same site by Bastion Development Corp., which had proposed a 95-unit building using density bonus incentives. Bastion later sold 975 Manhattan, as well as a companion site across the street, to Jamison Services, which entitled them for larger projects using the Transit Oriented Communities guidelines. Jamison has already commenced work on adjacent site at 988 S. Manhattan Place, which is approved for a 118-unit apartment building with ground-floor retail along Olympic Boulevard.