A strip of city-owned land in Canoga Park is set to be repurposed as a new entry pavilion to the Los Angeles River Greenway, according to a presentation scheduled for the August 10 meeting of the Cultural Affairs Commission. 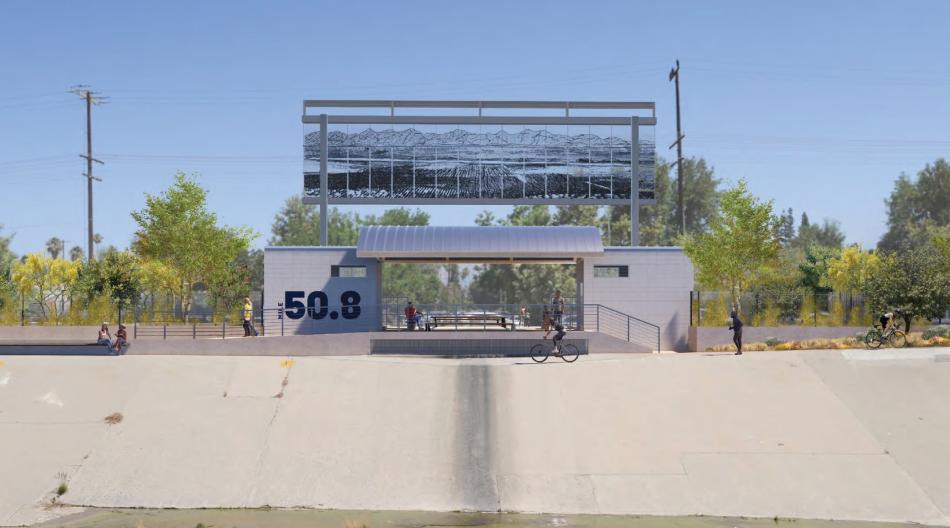 The proposed Headwaters Pavilion, planned at Bassett Street's T-shaped intersection with Alabama Avenue, is named due to its location at the confluence of the Arroyo Calabasas and Bell Creek, where the L.A. River begins. The city has tapped architect Frank Gehry and landscape architecture firm Olin to design the project, using the same team which led Los Angeles County's master plan process for the river.

The project, which would be located on the northern side of the channel, would frame the entrance to the river greenway with structures containing public restrooms. Framing the entryway, and supported by the two buildings, is a new shade canopy and public art. Other project components include picnic tables, bike racks, and a drinking fountain.

At the ground plane, new planters with water retention infrastructure are planned to either side of the entryway. Likewise, a curb bump-out is proposed at the entry way with new crosswalks across Bassett Street.

According to the presentation, the new Headwaters Pavilion will be among the first projects built using the guidelines established by the County's L.A. River Master Plan, which was adopted earlier this year. The plan, intended to establish a "kit of parts," for new open spaces and recreational projects along the corridor, has faced pushback from community organizations in central and southeast L.A. County, who have argued that their input was ignored during the planning process.

Site plan for the Headwaters Pavilion in Canoga ParkOlin