Nine months after we last dropped in, 4D Development & Investment and Category Company are putting the finishing touches on a mixed-use apartment complex in West Adams.

Located on an approximately one-acre site located at 5181 W. Adams Boulevard, the project consists of a six-story building that will feature 115 studio, one-, and two-bedroom apartments above a 46-car garage and approximately 16,600 square feet of ground-floor retail space. 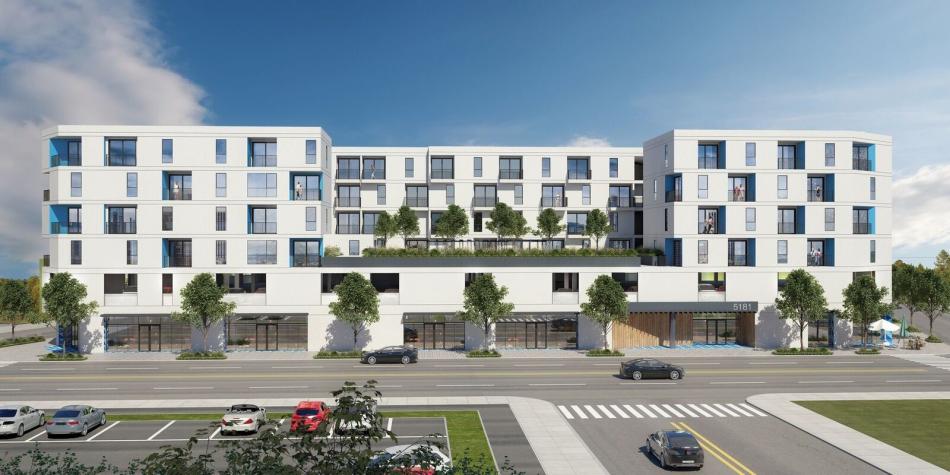 Project entitlements include density bonus incentives permitting a larger building than allowed by zoning rules. In exchange, 13 of the new apartments will be set aside for rent as very low-income affordable housing.

Bittoni Architects designed 5181 W. Adams, with AFCO Design serving as executive architect. The podium-type building has a U-shaped footprint above its second level, wrapping an open-air pool deck. The finished product is intended to have a white-colored stucco exterior with blue accents.

A leasing profile for the project's ground-floor retail space advertises a completion date in March 2023.

The project is among the largest of a recent slate of multifamily residential developments to rise along Adams Boulevard, the bulk of which are being built by Mid-Wilshire-based real estate investment firm CIM Group.

4D Development's other projects include the E. On Grand apartments in Downtown Los Angeles,  a residential-retail building rising near the Vermont/Beverly Metro station, and a new housing complex taking shape on Hoover Street in Pico-Union.