Rumors have been circulating, but it's now official: Costco is coming to Baldwin Village.

Developer Thrive Living has announced plans to redevelop a five-acre property at 5035 W. Coliseum Street, formerly home to View Park Community Hospital, with a mixed-use apartment complex featuring a Costco on the ground floor. Located just east of La Brea Avenue, the proposed project would include 800 apartments in a new building composed of prefabricated modular units.

“Mayor Bass has declared a housing emergency in Los Angeles, and we’re answering the call,” said Jordan Brill of Thrive Living in a news release. “Our company is focused on addressing the severe housing affordability crisis in Los Angeles, while also attracting retailers willing to make long-term commitments and deliver community-serving products and services that enrich the living experience for our residents and neighbors.” 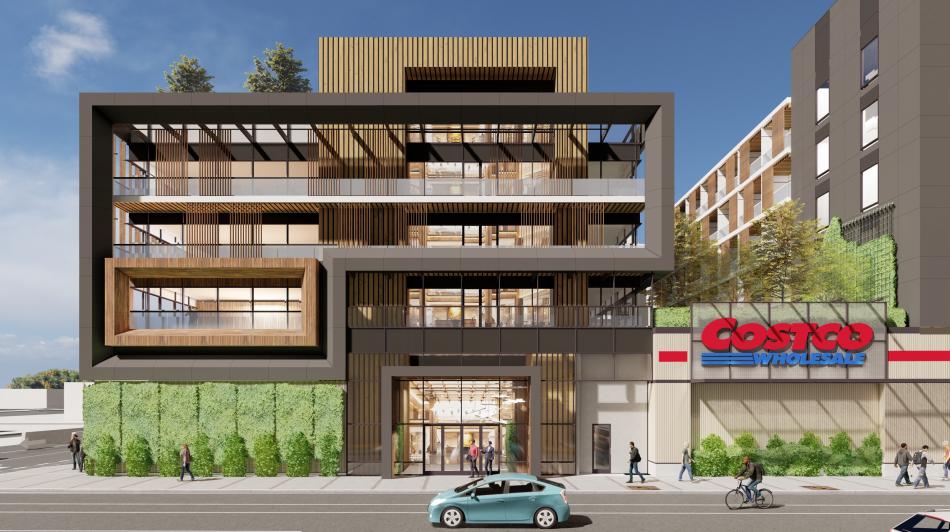 Although the project has yet to be filed with the Planning Department, a project description indicates that plans rely onto allow greater density and floor area than zoning rules would otherwise permit. Thrive Intends to set aside 184 of the new apartments as low-income affordable housing, making the project eligible for Transit Oriented Communities incentives that permit greater density and floor area than otherwise allowed by zoning rules. The remaining market-rate units are described as non-subsidized affordable and workforce housing, which will be made available to renters with Section 8 vouchers, including families and seniors in the surrounding community.

The ground-floor Costco is set to include produce, optical services, a pharmacy, and delivery services for nearby businesses. The new store is expected to create up to 400 jobs.

"This is truly a game changer for us and a huge investment in the community," said Brenda Ashby of the Crenshaw Manor Community Association." We are excited to have quality groceries close to home, in addition to all the other services Costco provides."

AO is designing proposed six-story building, which would sit atop a multi-level basement parking garage, is also slated to include indoor and outdoor amenity spaces, which are intended to cater to the surrounding community. Plans call for five courtyards, a landscaped walking path, a rooftop pool, basketcall courts, play structures, and a fitness area. Likewise, the property is expected to incorporate outdoor spaces for movie nights, community gardens, and room for classes.

Thrive Living is an affiliate of Magnum Real Estate Group, a New York-based firm which recently acquired the neighboring Baldwin Hills Shopping Center to the north at 5060 Obama Boulevard. The nearly 104,000-square-foot property is anchored by a Ralphs grocery store.

The project sits less than a half-mile south of Metro's Expo/La Brea Station, which is served by the E Line. Properties surrounding stops on the E Line have proven attractive to developers in the past decade, with large mixed-use projects starting to sprout near stops at Bundy Drive, Sepulveda Boulevard, La Cienega Boulevard, and Crenshaw Boulevard, as well as in Culver City.