The Glendale Transportation Center, completed nearly 100 years ago by the Southern Pacific Railroad, is one of the city's most important landmarks, with a spot on the National Register of Historic Places. Its surroundings, the largely industrial Tropico neighborhood, is a bit less distinguished, but could gradually get a more welcoming look under new standards put forth by the Glendale's Planning Division.

The proposed design and development regulations are an element of the proposed Tropico Transit Oriented District, which encompasses the blocks which surround the train station to the east, as well as other sites on corridors including San Fernando Road, Glendale Boulevard, Los Feliz Road, and Central Avenue. While TOD district will introduce new zoning to the area, the plan does not increase densities beyond what was established under the South Glendale Community Plan update in 2018. Instead, the effort is focused on issues such as building orientation, site planning, landscaping, and open space, in a bid to improve the pedestrian environment and support the adjacent rail hub. 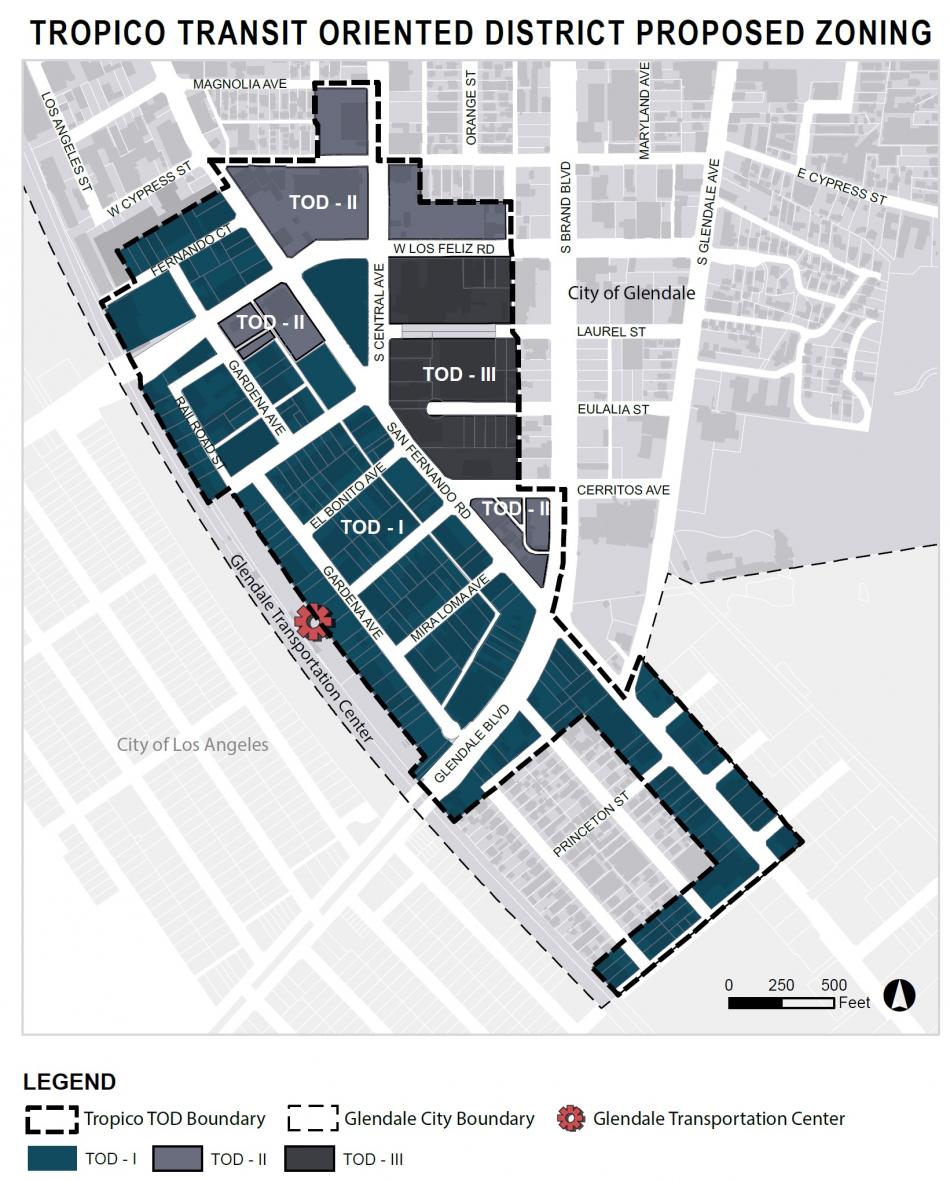 The plan divides the TOD district into three different zones:

Across the TOD District, the design and development standards include guidelines for sidewalks adjacent to new construction, mandating a 15-foot right-of-way between building lines and the street. Likewise, the design regulations stipulate that the type and location of sidewalk paving, street trees, light fixtures, curb extensions, and sidewalk furniture are to be decided by the city.

New buildings are permitted a maximum 10-foot setback from the street, with the condition that the setback area be made available to public access at all hours of the day.  Parking and permanent fences over three feet in height in the setback area are not permitted, with any space beyond two feet required to be covered in landscaping or paving, with the exception of walkways, driveways, and outdoor seating areas. 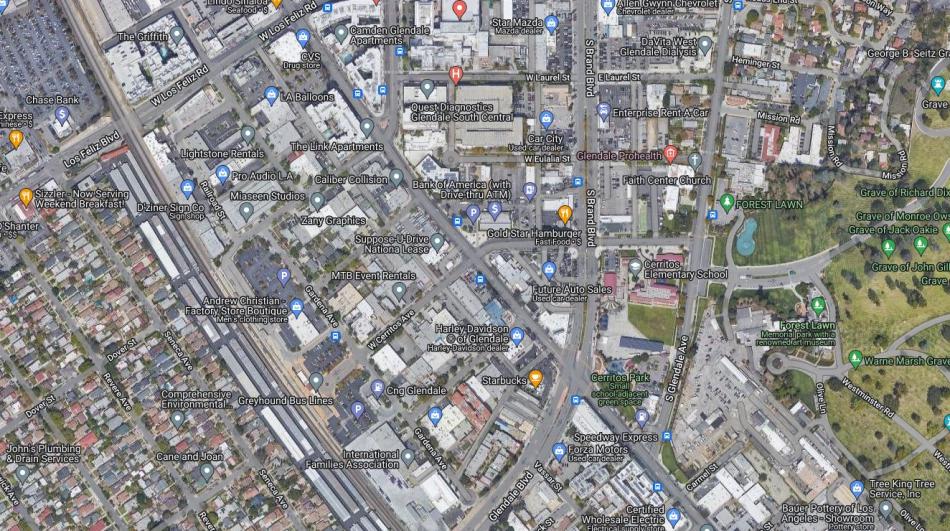 Similar to many recent planning efforts in other Los Angeles County jurisdictions, the TOD District does not itself plan for new park space, but instead attempts to bring new open space to the neighborhood by requiring developers to dedicate space within new projects. Any development with a street frontage of more than 60 feet is required to set aside 10 percent of the total site area as publicly accessible open space. If a site is greater than two acres in size, that amount increases to 14 percent.

At-grade parking is permitted within the plan area, with limits based on a site's total street frontage. On properties with less than 100 feet of frontage, up to 80 percent of the development site may be occupied by at-grade parking. However, sites with more than 100 feet of frontage may only set aside 60 percent of ground-floor space for parking. However, the design regulations also stipulate that parking should be oriented to the rear of the building - away from the public right-of-way - and fully screened from view with habitable spaces.

Additionally, while buildings of up to 60 feet in height are allowed in the TOD I and TOD II zones, a six-foot setback is required for any portion of the building that rises more than 50 feet in height. Buildings below that threshold, and adjacent to publicly accessible open space, are not required to provide a setback. 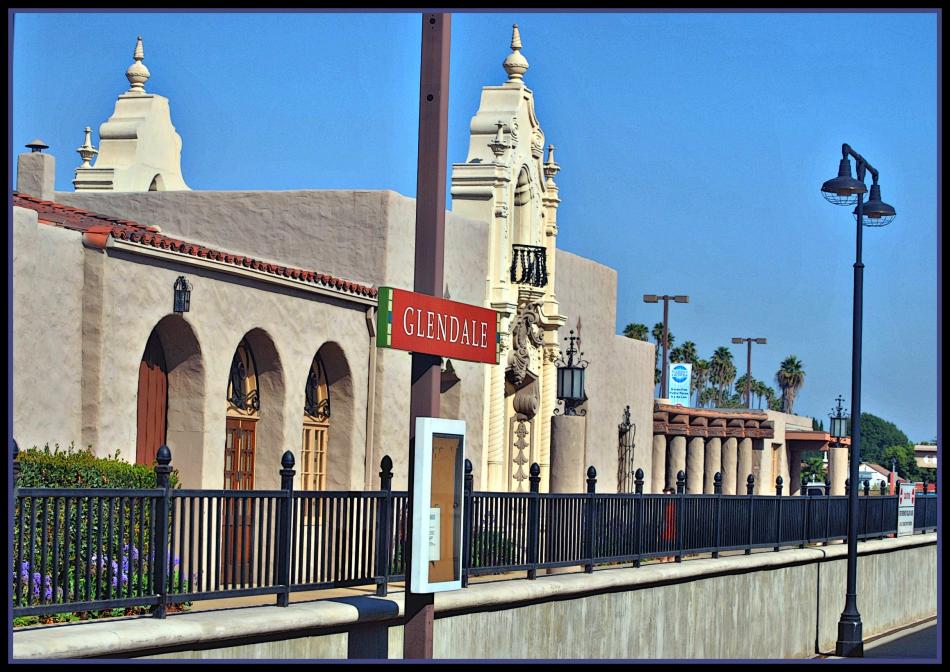 View of the Glendale Transportation Center from tracksWikimedia Commons

The design and development standards, which also touch on issues such as building materials, facade modulation, and other architectural features, is scheduled for review at the November 10 meeting of the Glendale Design Commission.

The new regulations come at a time when the Tropico area is set to undergo major changes, including new development and the potential start of work on a new streetcar line within the next five years. Additionally, upgrades through Metrolink's SCORE program are poised to increase service to the Glendale Transportation Center in the coming years, potentially attracting new investment to the neighborhood.