A surface parking lot located a few blocks from the beach could be redeveloped with housing and commercial space, according to a presentation scheduled for the November 2 meeting of the Santa Monica Planning Commission. 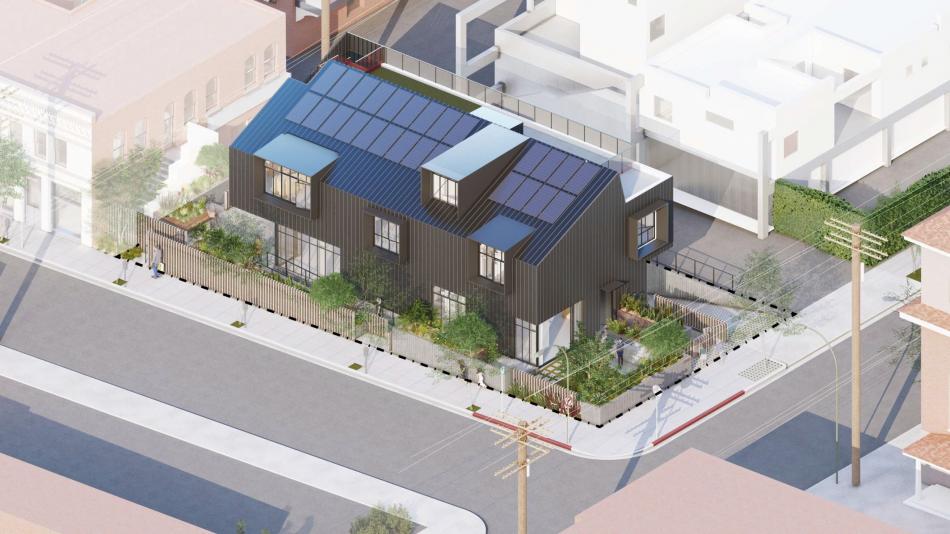 Redcar Properties, which owns the project site at 2668 2nd Street, proposes to raze the existing asphalt parking lot to build a new two-story building with two residential units and a roughly 738-squar-efoot neighborhood market at street level. Plans also call for seven parking stalls to be located in a single subterranean level.

Kevin Daly Architects is designing the proposed development, which would include a two-story, three-bedroom townhome and a two-bedroom flat above the proposed market. Plans show an exterior of wood siding, and a small courtyard located on the western side of the building.

Among the issues under consideration is the project site's location within the Third Street Neighborhood Historic District, the first in the City of Santa Monica, which includes 38 buildings completed between 1975 and 1930 in the Ocean Park neighborhood. While the proposed development has a modern exterior, a report from Historic Resources Group found that its design meets local and federal guidelines for new construction within historic districts. That conclusion was echoed by the Santa Monica Landmarks Commission, which signed off on the design at a meeting in July 2022.

Redcar, which is based in Santa Monica, is best known for its growing collection of office developments in Santa Monica, Culver City, and Downtown. While offices are the company's bread and butter, this is not the first time Redcar has tried its hand at residential. In 2017, the firm submitted plans to the City of Los Angeles to build a 203-unit apartment complex near Olvera Street, although the project has since been canceled, and the land sold.