In 2016, Irvine-based developer SunCal made headlines by announcing plans for a $2-billion mixed-use, high-rise complex at the intersection of 6th and Alameda Streets in Downtown Los Angeles. Six years later, that project can be relegated to the ranks of Never Built Los Angeles, as a new property owner looks to instead capitalize on the seemingly endless appetite for production facilities.

Earlier today, East End Capital announced the acquisition of the 15-acre property at 6th and Alameda, which currently houses a produce warehouse and distribution facility. Although the project is currently in the planning stages, a news release from the developer indicates that the property could accommodate more than 15 soundstages, as well as offices, mill, and other ancillary features associated with a film studio.

“High-functioning neighborhoods always have a robust jobs-housing balance,” said East End Studios partner Craig Chapman in a statement. “Our track record clearly demonstrates a focus and expertise in the creation of studio/soundstage facilities. This gateway site will be a massive jobs engine and also one of the premier, most technologically advanced studio production facilities in Los Angeles.” 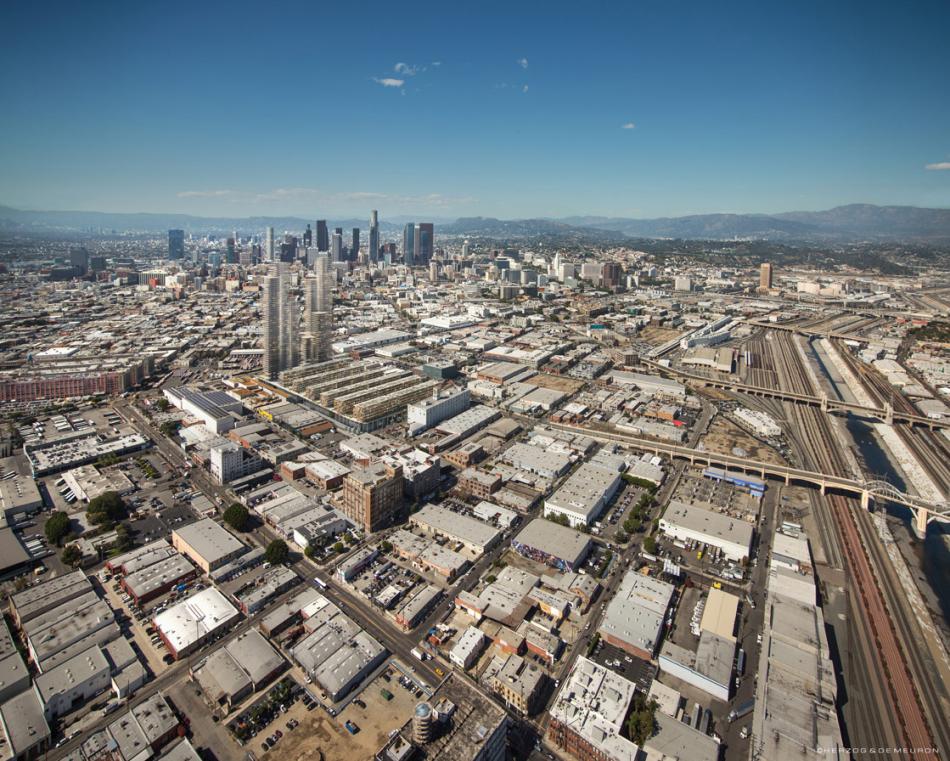 Aerial view of the now-cancelled 6AM developmentHerzog & de Meuron

SunCal, which sold the property for an undisclosed sum, purchased the land in 2015 for $130 million. The developer had partnered with architects Herzog & de Meuron to plan a towering mixed-use complex, highlighted by what would have been two of the tallest buildings in Los Angeles. The now-cancelled project called for the construction of more than 1,700 apartments and condominiums, a hotel, offices, shops, and restaurants.

While the new owners will not be moving forward with a mixed-use project, its backers nonetheless hope to integrate the property into the surrounding Arts District neighborhood. The project site is flanked by new housing, including developments from AvalonBay and Camden Property Trust on neighboring properties to the south.

“Whatever direction our plans ultimately take for this site, we plan to work closely with the Arts District community to ensure our project builds off the area’s strengths,” said East End Capital managing partner Shep Wainwright. “The vibrant street life is part of what makes the Arts District special, and we will look to enhance that character.”

In the era of streaming services, demand has outstripped the supply of Los Angeles area soundstages. The Arts District has already seen some evidence of that dynamic: just a few blocks south on Alameda, Atlas Capital Group is planning soundstages of its own at the site of the L.A. Times printing plant.

“This area has served as the industrial heart and creative pulse of Los Angeles for over 100 years,” said Estela Lopez, the executive director of the Downtown Industrial District Business Improvement District. “Developing new job-creating uses for current and future residents in close proximity to where they live harkens back to the neighborhood’s historic success and will bring the arts back into the Arts District.”

The project is something of a familiar story for SunCal, which has a portfolio consisting mostly of master-planned communities, but has occasionally ventured into urban mixed-use projects. More than a decade ago, the company won a bidding war with future president Donald Trump to acquire a property located at 10000 Santa Monica Boulevard in Century City, and partnered with the French architect Jean Nouvel on plans for a 45-story condominium tower. As with the Arts District property, changing market conditions delayed, and then eventually felled the project. The land was later acquired by developer Crescent Heights, which has since built a luxury apartment high-rise on the site.

The 6th and Alameda property is East End Capital's fourth acquisition in the Los Angeles area, where the developer is planning more than 2 million square feet of soundstages. The company, which has offices in both New York and Los Angeles, is planning smaller projects in Boyle Heights and Glendale.