A restaurant located just north of the intersection of Olympic Boulevard and Vermont Avenue in Koreatown could be razed to make for the construction of a mixed-use apartment complex, per an application submitted recently to the Los Angeles Department of City Planning. 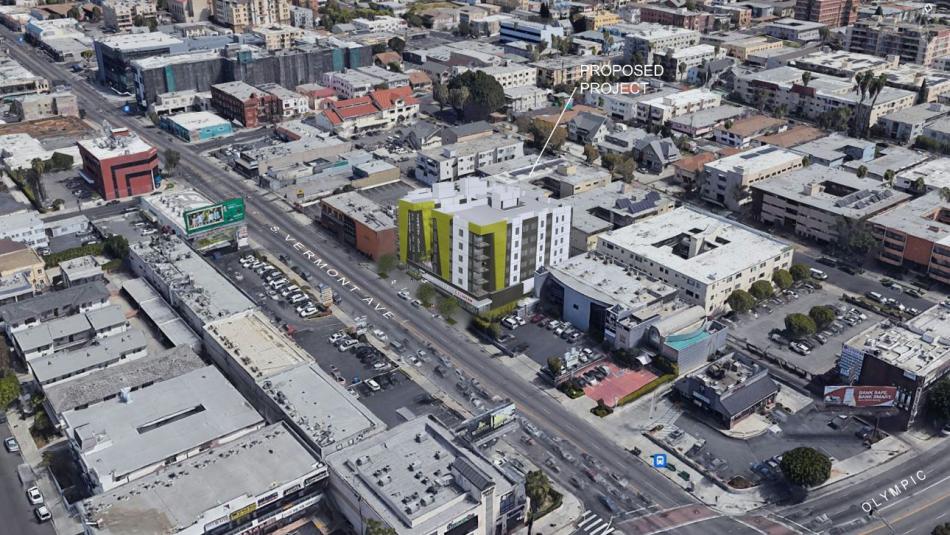 The project, proposed by property owner and applicant Teh Jing Wang, would rise from an approximately 14,000-square-foot site located at 966 S. Vermont Avenue, replacing the 1950s restaurant building as well as a rear parking lot. In their place, plans call for the construction of a six-story edifice which would feature 90 studio, one-, and two-bedroom apartments atop approximately 2,815 square feet of ground-floor commercial space and an 85-car garage located at-grade and in two subterranean levels.

Requested entitlements include Transit Oriented Communities incentives permitting a larger structure than allowed by zoning regulations. In exchange, nine of the new apartments would be set aside as deed-restricted affordable housing at the extremely low-income level.

Renderings depict the proposed apartment complex as a contemporary podium-type building clad in white stucco and accented by chartreuse-colored metal panels. The building would have a U-shaped footprint above the podium-level, providing a small courtyard overlooking Vermont, as well as an additional amenity deck at the roof level.

Plans indicate that landscape architecture firm SQLA is working on the project.

The proposed development would rise just north on Vermont Avenue from a full-block site where the City of Los Angeles has approved the construction of a larger mixed-use complex featuring 228 apartments and commercial uses. One block east at Olympic Boulevard’s intersection with Westmoreland Avenue, another property owner recently submitted plans to the city to build a 143-room hotel.