East End Capital is cooking up plans for yet another Los Angeles area studio campus, according to an initial study published this month by the City of Glendale.

The New York-based real estate firm's latest project, according to the initial study, would rise from a roughly nine-acre site at 5426 San Fernando Road and 753 W. California Avenue that is currently improved with a series of warehouses, surface parking, and loading areas. East End proposes to raze those existing structures, clearing the way for four new buildings containing 10 new soundstages, three flex spaces, offices, and other support spaces. The property would be served by more than 500 parking spaces, located at-grade and in a four-level garage.

Relativity Architects is designing the campus, which would include buildings rising up to 93 feet in height. A site plan shows that the property would include a series of rooftop decks on the upper floors of the buildings, overlooking the surrounding area. 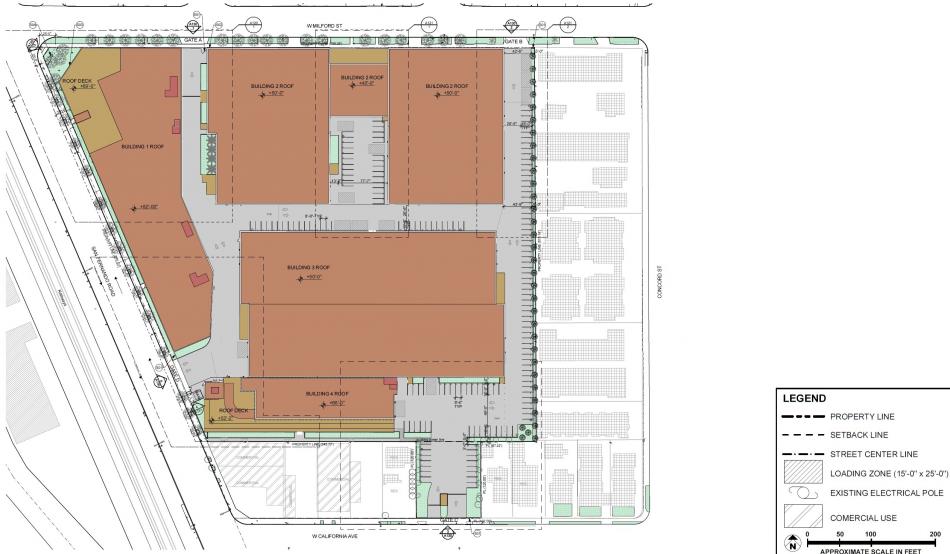 Construction of the studio complex is contingent on the approval of discretionary entitlements by the City of Glendale, including permission to exceed a 50-foot height limit that is currently imposed on the site.

A timeline for the project is not stated in the initial study.

While the project may call for more than 400,000 square feet of new construction, it is not East End's largest project in the Los Angeles area. That honor goes to a proposed Arts District campus which would include 16 soundstages and nearly 300,000 square feet of offices on a site at Alameda and 6th Streets.

Other East End projects, which are also designed by Relativity, include smaller studio properties slated for Boyle Heights and Glendale Avenue.