On the west side of the L.A. County Museum of Natural History, construction quietly commenced this year for NHM Commons, a long-planned expansion which will replace the shuttered Jean Delacour Auditorium. This week, the Natural History Museums of Los Angeles County, which manage the facility, announced new details regarding the upcoming project. 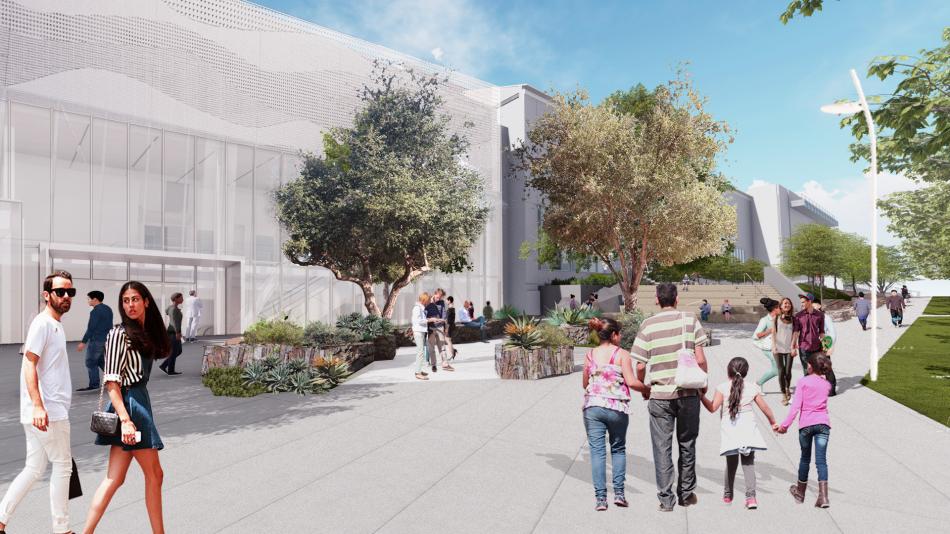 Slated to open in 2024, the $75-million NHM Commons expansion will include approximately 60,000 square feet of space adjacent to Bill Robertson Lane, creating a new entryway to the museum. Frederick Fisher & Partners and landscape design by Studio-MLA headline the design team for the project, while new exhibit spaces on the interior will be designed by Studio Joseph.

“I am thrilled to announce the creation of two NHM Commons advisory groups consisting of incredible community leaders who have joined us to guide program development for this new wing and beyond,” said the Natural History Museums' president and director Dr. Lori Bettison-Varga in a news release. “We envision NHM Commons as a community gathering place, and the collective influence of these councils will help us deliver on that promise.”

Frederick Fisher & Parnters' design for the expansion does away with the blank walls that currently front Bill Robertson Way, replacing them with a glass facade which allows passersby to see into the museum interior. Likewise, a new plaza is planned on the exterior of NHM Commons, creating a "front porch" for the museum, and a gathering place for visitors to Exposition Park. 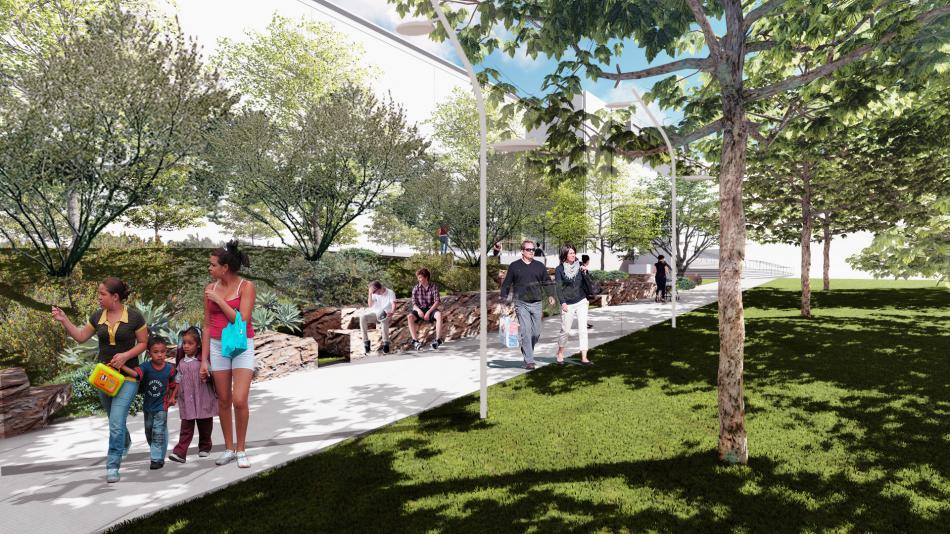 The project incorporates input from the museum's Native American Advisory Council, which includes representatives of Southern California indigenous communities such as the Gabrieleno-Tongva, Tataviam, Chumash, and Ajachmem. The Los Angeles Times reports that the Advisory Council will work with Studio-MLA on the plaza entry to NHM Commons, as well as its surrounding landscaping, with the intention of honoring Native American communities and acknowledging that Los Angeles was built on Native land.

Inside, plans call for a new 400-seat theater to replace the Jean Delacour Auditorium, which will offer a space for performances, discussions, educational content, and festivals.

Likewise, the new Judith Perlstein Welcome Center will house Gnatalie, a colossal real skeletal mount composed of multiple specimens belonging to a Diplodocus-like dinosaur. Due to infilling by the mineral celadonite during fossilization, the Jurassic-era skeleton has a unique green color. Gnatalie is billed as the first real skeletal mount of a long-neck dinosaur on the West Coast. 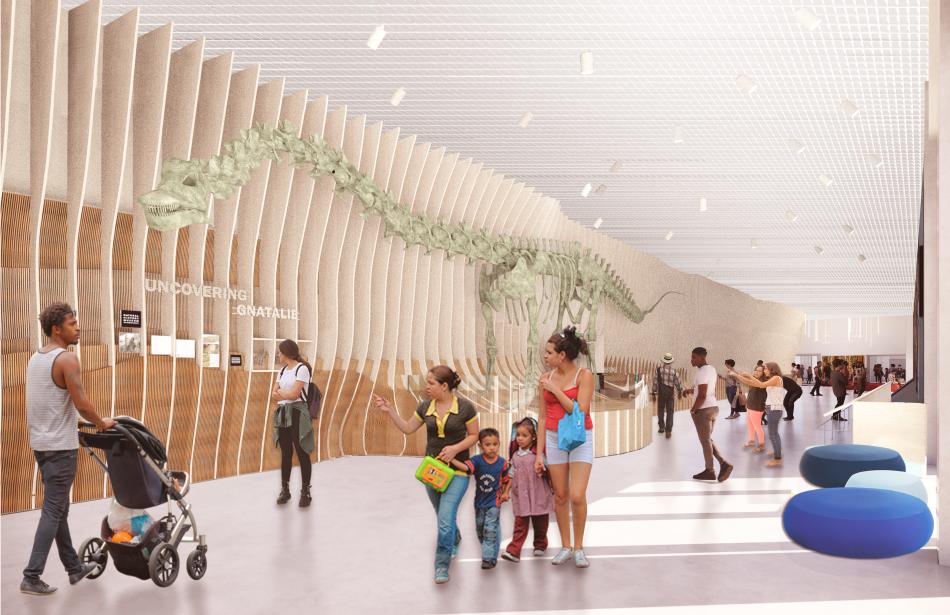 Other features of NHM Commons which will be available to visitors without a ticket include Barbara Carrasco's mural: L.A. History: A Mexican Perspective, as well as a new cafe with indoor and outdoor seating, and retail space within the Wallis Annenberg Lobby.

The cost of NHM Commons is being covered by a fundraising drive that has generated more than $100 million, and also provides money for endowment and programmatic fundraising efforts.

The Natural History Museums is also engaged in a new master planning process for the La Brea Tar Pits and Page Museum, which aims to revamp the 13-acre Miracle Mile landmark that is considered the only active urban paleontological site in the world. 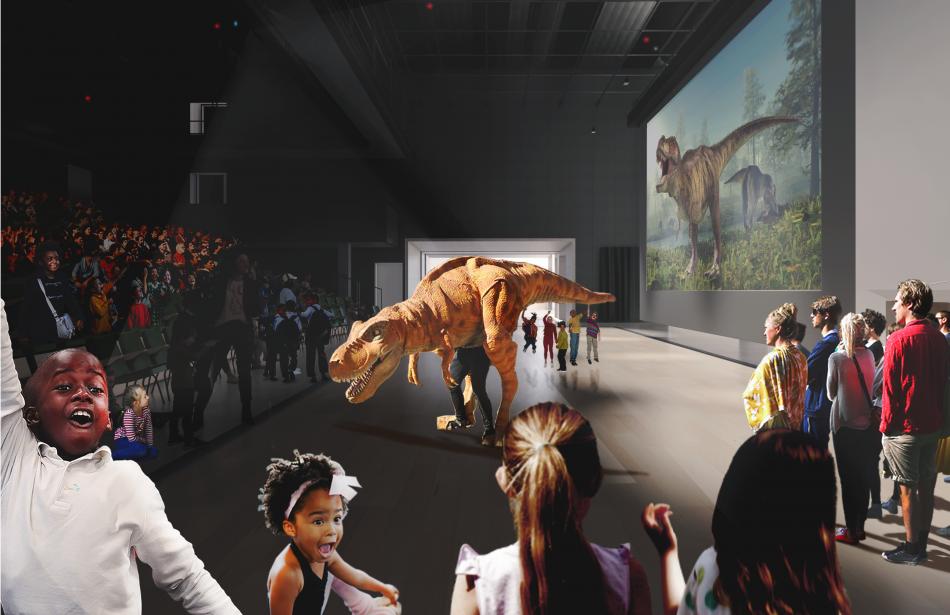 The Natural History Museum's expansion comes just two years after officials adopted a new master plan for Exposition Park, which will guide the development of the 160-acre space over the next 25 years.  Additionally, the project comes on the heels of the $1-billion Lucas Museum of Narrative Art, a hulking structure now taking shape across Bill Robertson Lane, and the $400-million Samuel Oschin Air and Space Center, a towering 20-story structure at the California Science Center which will serve as the permanent home of the Space Shuttle Endeavor.