Prologis, best known for building logistics hubs, is looking to get in on L.A.'s soundstage boom.

The San Francisco-based company announced today that it is filing an application with the L.A. Department of City Planning for the redevelopment of a more than nine-acre property at 1716 E. 7th Street in the Arts District. The more than eight-acre site, which Prologis acquired last year for more than $90 million, was long the home of the Greyhound's Los Angeles bus terminal. Greyhound recently relocated its operations to a bay at Union Station Patsaouras Transit Plaza . 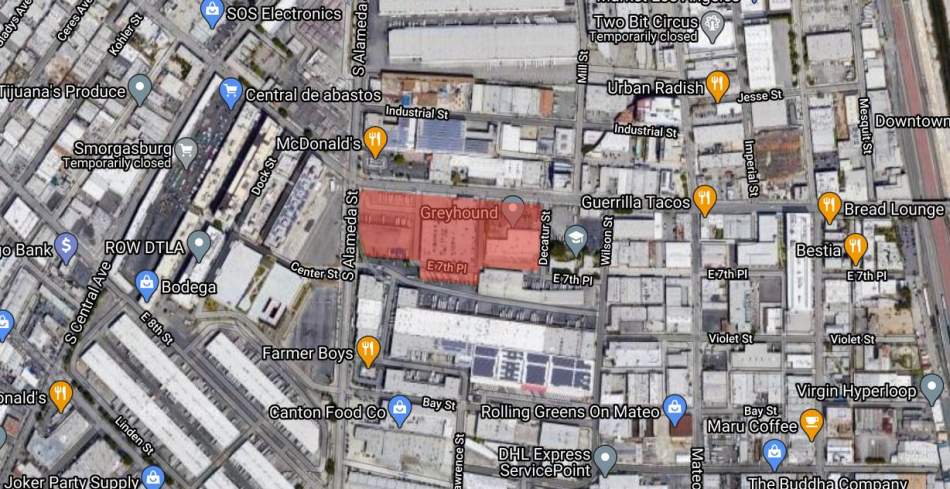 Prologis intends to raze the now vacant intercity bus terminal, clearing the way for a new production studio campus at the southeast corner of 7th and Alameda Streets. The proposed project, named Alameda Crossings, would include 10 soundstages and 291,000 square feet of office and support space. Plans also call for a parking garage with capacity for 941 vehicles and 136 bicycles.

Relativity Architects is designing the proposed project, which would be wrapped with new street trees and landscaping.

Likewise, Prologis has also an alternate scheme in its entitlement application which would permit the construction of a logistics facility catering to companies in the research and development place. In that concept, the property would also feature ground-floor commercial uses.

Rendering of Alameda Crossing built as a production studioRelativity Architects

“We are excited about the opportunity to redevelop what was the Greyhound Bus Terminal in LA’s Arts District," said Prologis vice president Lauren Achtemeier in a news release. "We will work with the city on our plans and engage with the community throughout the process. Prologis is a long-time member of the Los Angeles business community. We own and operate 17 buildings in the City of Los Angeles, resulting in over 1,000 jobs and supporting more than 60 customers.”

The project, which does not have an announced timeline, is the third large studio complex planned along Alameda Street, which represents the Arts District's western border. Atlas Capital Group has already secured approvals for a new campus with 11 soundstages and offices at the current site of the L.A. Times printing plant, which has been dubbed 8th & Alameda Studios. A couple blocks north, East End Capital announced plans earlier this year to build 16 soundstages and offices on a 15-acre property at Alameda and 6th Street.

Relativity Architects, the design firm attached to the project, is also working on similar production facilities in Boyle Heights and Glendale.