Over the past couple of weeks, we took some time to reflect on some of L.A.'s biggest real estate, architecture, and urban planning stories of 2022. But with the calendar flip to January, it's time to look forward. Here's a preview of some projects that could be making headlines during 2023.

Offices, housing, and retail next to Expo/Bundy Station 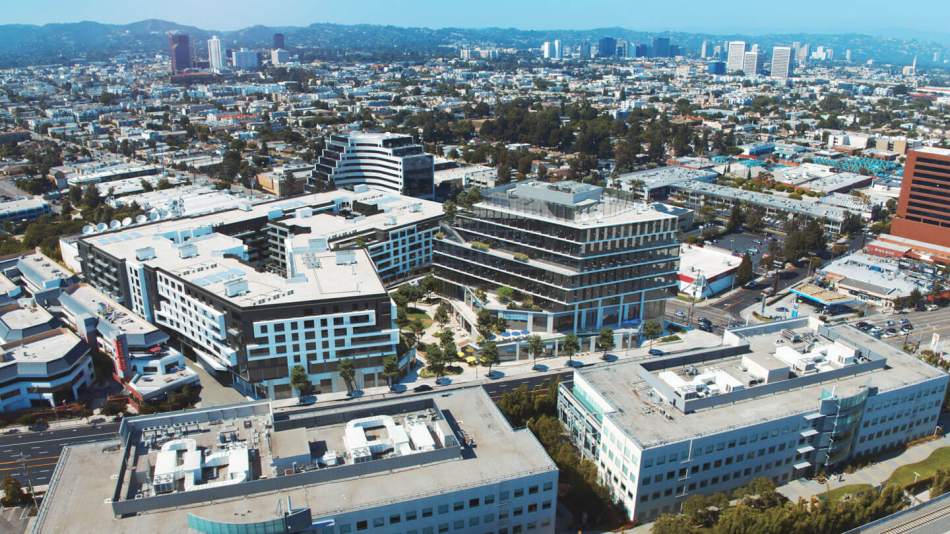 A block north of Expo/Bundy Station, Hines is putting the finishing the West Edge, a mixed-use office and housing complex on the former site of Martin Cadillac.

Located at the northwest corner of Bundy Drive and Olympic Boulevard, the project includes two buildings featuring a total of 600 apartments, including 120 units of workforce and very low-income affordable housing, accompanied by 200,000 square feet of office space and 90,000 square feet of ground-floor retail.

While the housing will await tenants over a lease-up period, we already know who is coming to the West Edge's commercial space. League of Legends maker Riot Games, which is headquartered out of a neighboring campus to the north, agreed to take all 200,000 square feet of office space in 2021. Meanwhile, Gelson's will anchor the ground floor of the property, with 36,000 square feet of space.

While the project may be the first big development to sprout next to Expo/Bundy Station, it will not be the last. Carmel Partners has plans to redevelop single-family homes to the south of the elevated station with more than 600 apartments. 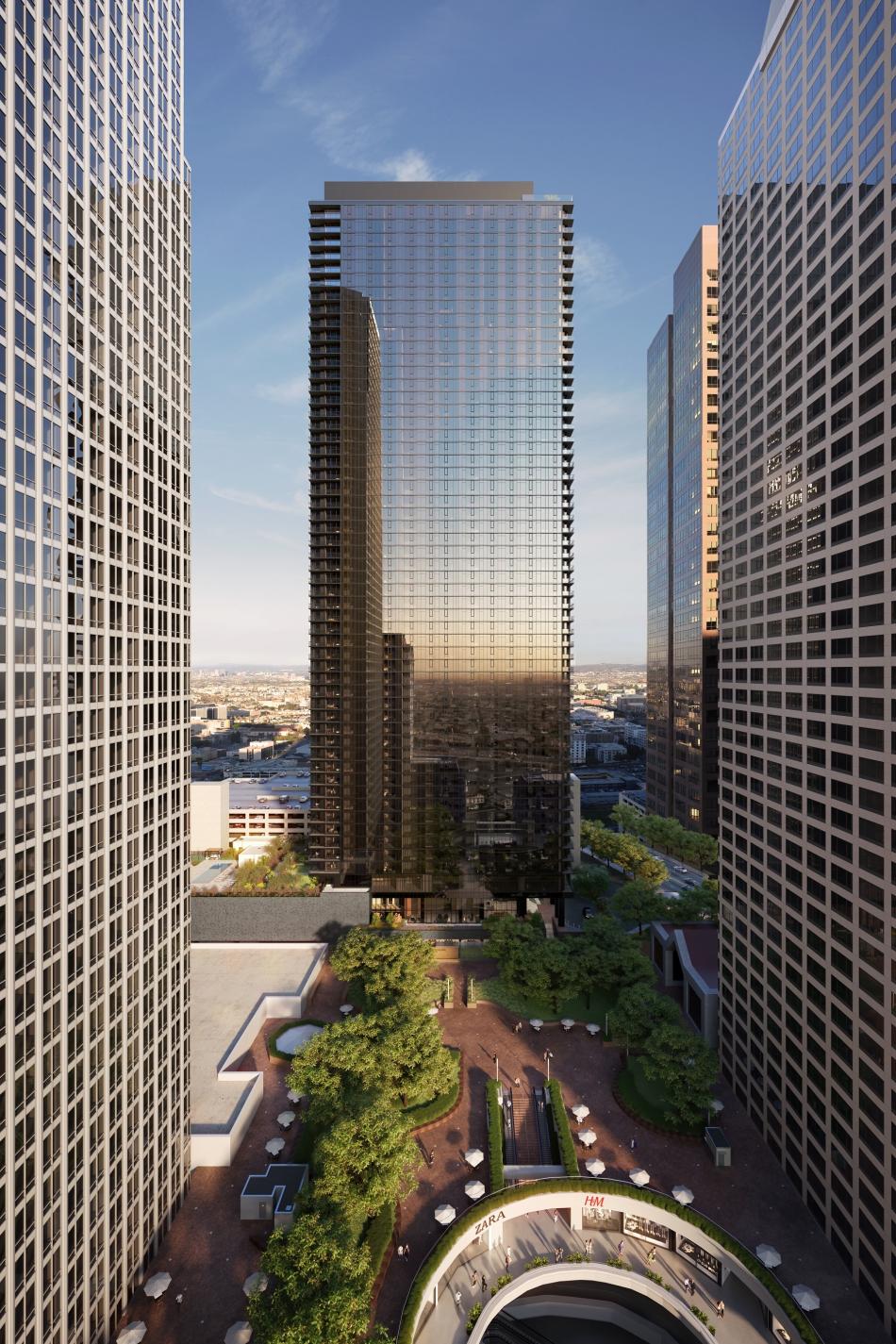 View of Beaudry looking west from above Figat7thCourtesy of Brookfield Properties

It's been a few years since a new residential high-rise opened its doors in Downtown Los Angeles, but 2023 should see the debut of two of them.

Brookfield Properties is wrapping up work on Beaudry, a roughly 60-story tower next to the Figat7th shopping mall, which will bring 785 studio, one-, two-, and three-bedroom apartments to the neighborhood. The tower is billed as the final component of a master-planned development first conceived by the late developer Robert Maguire in the 1980s, following the neighboring shopping center and the 777 Figueroa and EY Center office towers. 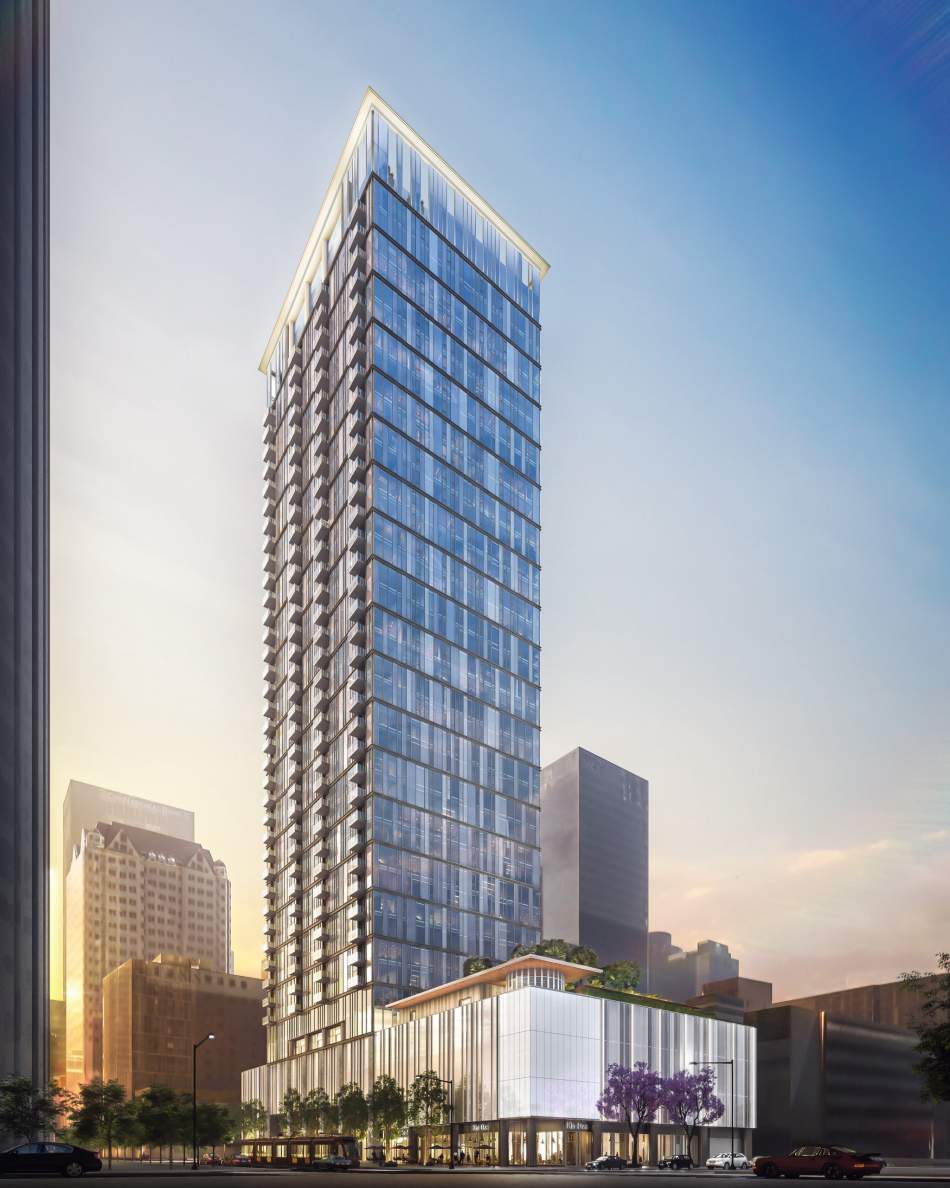 View from 8th and FigueroaShimahara

Just east across Figueroa Street from Beaudry, developer Mitsui Fudosan America is also scheduled to complete work on its 8th and Figueroa tower this year. The 42-story building will feature 438 studio, one-, and two-bedroom apartments above a glass-clad podium containing parking and street-level retail.

Both projects will serve as a test for Downtown's apartment market, which has taken a beating from the pandemic. A continued recovery is a must for Brookfield and Mitsui Fudosan, as both have additional projects in the entitlement phase nearby.

The Valley finally gets some (light) rail 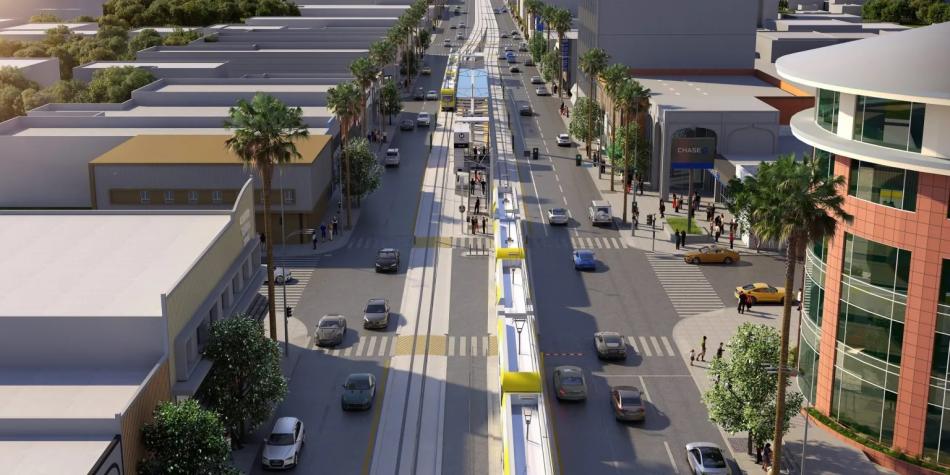 A groundbreaking ceremony that doubled as a send-off for departing Metro Board members occurred last year, but it is in 2023 that work should truly commence for the East San Fernando Valley line, which will bring 6.7 miles of at-grade rail to Van Nuys Boulevard. Plans call for 11 stops, as well as connections to Metrolink and the G Line busway, with service to begin sometime between 2028 and 2030.

It also sets the table for additional Metro projects coming to the Valley in the near future (including upgrades to the G Line and a new bus rapid transit line) and the distant future (a Sepulveda Pass rail line and a conversion of the G Line to rail). 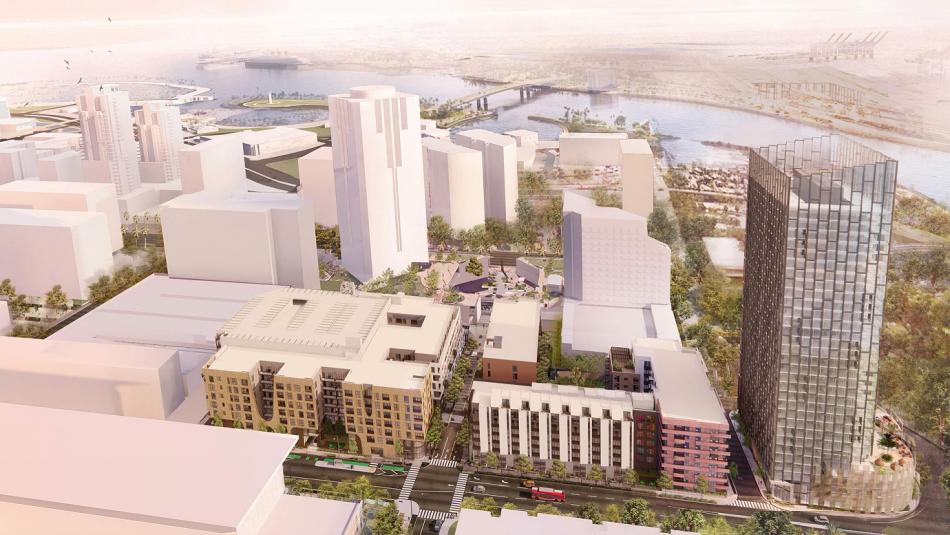 In mid-2023, Trammell Crow Residential is set to break ground on the first components of the West Gateway development, which would replace the parking lot just north of the Long Beach World Trade Center. Plans call for a total of six buildings featuring 756 residential units, 1,500 parking stalls, and a small ground-floor retail component fronting Broadway.

While originally slated to include two high-rise buildings, including a 40-story tower which would have ranked as the tallest in the city, a revised plan which emerged last year includes just one 31-story tower. It seems that Shoreline Gateway's time at the top of the Long Beach skyline will continue.

The project is slated for completion by 2025. 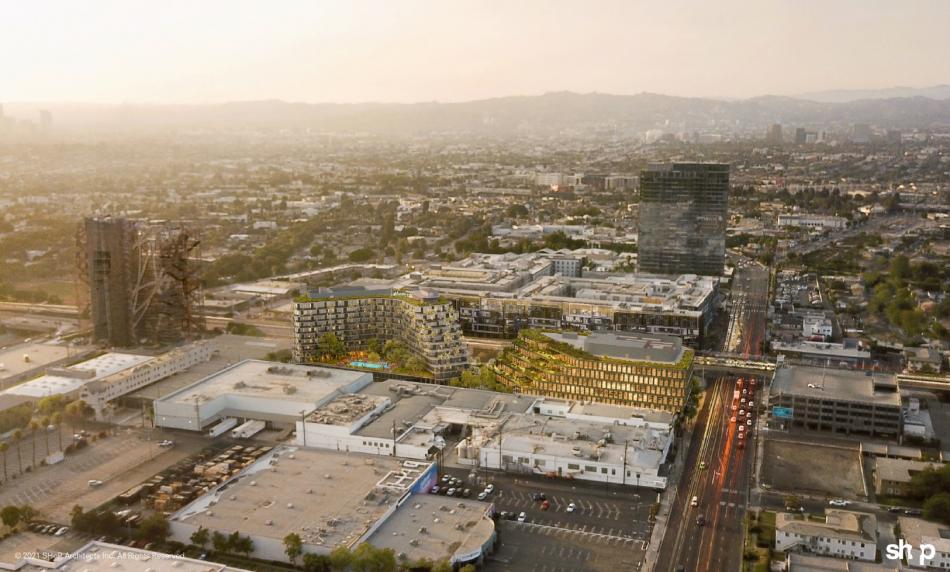 Lendlease has previously indicated its intent to break ground on the project in 2023.

The project at 3401 S. La Cienega Boulevard is part of a boom in development surrounding the E Line's Culver City and La Cienega/Jefferson Stations, following the completion of the Cumulus District and the Eric Owen Moss-designed Wrapper office tower. 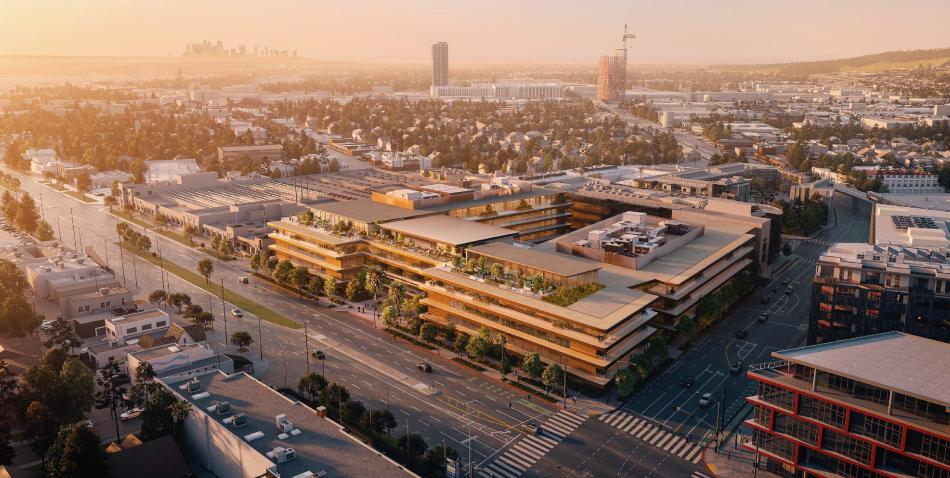 In late 2021, Apple announced plans to redevelop a series of commercial buildings near Culver City Station with a nearly 550,000-square-foot office campus. The project, which would double the Cupertino-based tech giant's presence in the region in a single stroke, is slated for a site at the southeast corner of Venice and National Boulevards.

While an environmental report has previously pointed to a groundbreaking in 2023, the development is complicated by its location directly on the boundary between L.A. and Culver City, meaning that both jurisdictions will have to provide sign offs. The project has yet to go before the L.A. City Planning Commission for its approval.

While the City of L.A.'s permitting process may be arduous, if there's any company in the world with the resources and political heft to get it done quickly, it's Apple.

Oceanwide Plaza - trying to shake off the rust 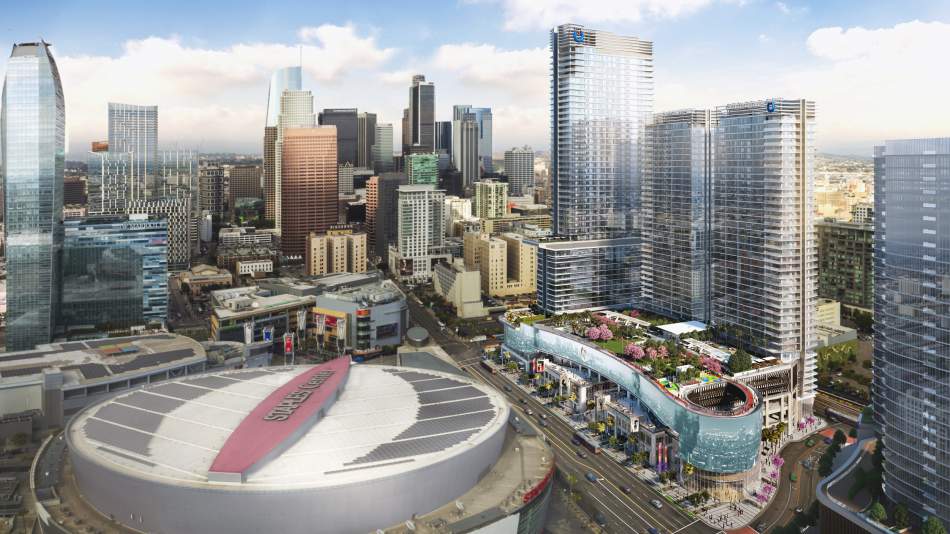 Take this news well salted, but troubled developer Oceanwide Holdings began sending signals last year that construction may finally resume at the long-stalled Oceanwide Plaza complex in Downtown in 2023 - if money can be secured. Mostly finished, but stalled since 2019, the three-tower complex is slated to bring 504 condominiums, a 184-room Park Hyatt hotel, and approximately 150,000 square feet of retail space to the city block bounded by Figueroa, Flower, 11th, and 12th Streets.

Then, just a few weeks ago, the Chinese developer announced that it had entered into a non-binding letter of intent with an unnamed potential buyer for the property. Will this finally be the year that Oceanwide gets back on track? Or will the husk remain a husk for the foreseeable future?